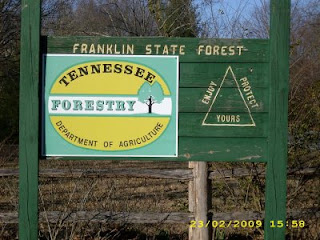 First off, it takes an act of God to get a map of this place. You will not get any helpful information on the Internet. You can get a map at the ranger station that is north of Hwy 41A on Fire Tower Road next to the fire tower. This is not in the park. They are not opened on weekends or most hours of the week. They will mail you a black and white copy of this map which will help you none at all. There is a trail description that is posted next to a map at the unused Ranger station at the park. You cannot get a copy of this description. I took a picture of it and typed it out when I got home. So now that we have that clear:

Troy, Marco, and I head out after work. As usual everyone makes fun of us because of the weather and sure enough as we head down I-24 we start with the snow flurries. They get heavier as we get closer to Sewanee.

We got on the trail at 9:30. Since anyone can hike the trail according to the description, we hike it backwards going counter clockwise around the park. It took us right at a half mile before we made a wrong turn. Since we didn’t know the name of the trail, which isn’t written on the map or description, we took a turn at the first sign that said Swedon Cove hiking trail. After we ended up crossing 156 again, I consulted the map, backtracked a half mile, crossed the campground and found a sign for the West rim trail. Yep, that’s the name we were hunting. We call that an Outcast warm up.

Once we got on the trail it was very well marked and at most road crossings you got a letter A-W in order that corresponded with the map. It is a very well maintained trail and easy to follow.

The first four and half miles were through the woods and then we hiked the rim of Crooked Tree Hollow. One of the concerns that we had was water supply. After we were assured that there was no water on the trail when we picked up the map, I copied the trail description and every other line was “Cross Creek.” We didn’t have any problem finding water.

Marco was again a source of entertainment for us on the trail. First off when we came to a split in the trail, he had warmed up and took off his jacket. We went on by him and a little while later he asked me if his jacket was still on the back of his pack. NO! He ended up hiking back to the split and found his jacket hanging on the sign where he took it off. He had tied it to his pack and then rubbed it off on the sign when he put his pack on. Next, he had bought a new camera and was proud of it all week before this hike. He put fresh rechargeable batteries in it for the trip. When we got to Crooked Tree Hollow where the scenery really got good, his batteries died. When he got home and read the instructions he found out that he had gotten the wrong batteries.

The campground that is marked on the map on the West side has a beautiful view but is literally trashed. It is sad that people will ruin a good thing. I did take a picture of the Red Neck toilet with the appropriate empty beer cans. We made camp around 4:00 at the ten-mile mark including our warm up. It is marked on the map as N.

We set up our camp and then collected firewood. I pushed over an old rotten tree that I thought we could use as a bench. I couldn’t move it by myself so I went on collecting wood. Marco walked by it and saw something move. It ran up a tree next to him and it looked like a chipmunk. As all three of us watched him reach the top, it jumped and flew to the ground by me about 30 feet away. It was a flying squirrel, which I have never seen other than on TV. We all got excited about that! Later when I was telling my daughter about that she let me know that “it doesn’t take much to get you excited”.

We got on the trail by 9:00 the next morning. The low was only 18 degrees. It was another beautiful day for hiking. We continued east, crossed 156, and ate lunch at Stromeyer overlook that looks over Sweeten cove at marker H. After a short siesta we headed on to the cars. Both of the campgrounds on the east side of the park were clean.

When I got to where we could see 156, I beat Troy to the punch and did the run while doing push ups with my hiking poles over my head as he had shown me in the past. You know that Troy joined in an ran to the end as well.

We would recommend this hike. Very well kept and beautiful. 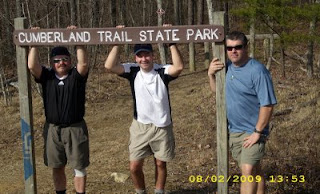 Marco, Raleigh, and I made this hike. We headed out after work and dropped a truck off at the Heiss Mountain Road trailhead. We then drove back to Mowbray Pike and parked at the marked location on Millsap Road. It took us a little longer to find Mowbray Pike because the street sign is not there off Dayton Pike. You need to turn by the Dollar General store. We ended up going further south on Dayton Pike to Mountlake road and coming down Mowbray pike from the other side. You definitely want to print off the directions, maps, and trail description off the Cumberland Trail website. They are very helpful.

We got on the trail at 10:30. Shortly after you get on the trail, you go through the Little Stone Door and pass the Indian Rock House. The trail travels the side of the mountain until you go into the Little Soddy Creek Valley. We stopped and had lunch before Clemmons point where we could enjoy the great view of the valley below and see the peaceful looking Sequoyah Nuclear power plant.

Just before you drop down into Little Soddy Creek valley you pass above a house and then the trail drops down. There was a generator and some other stuff off to the side. There was an extension cord hooked to the generator running off somewhere. We didn't hang around to investigate!

Once you cross the Little Soddy creek you will find remains of the old Soddy Coal Company and the area where they have been trying to clean up years of illegal dumping. This is a very challenging area to try and remove a lot of tires, wash machines, and the likes. From here you climb up and cross Hotwater road.

Hotwater road is where we met the members of the Soddy Daisy chapter of the Tennessee Trail Association. They had been working a section of the trail from Hotwater road to Posey point. And a mighty fine job they had done. We talked to a few of the members at the road and then about eight members on the trail. Super folks and we just can’t thank them enough for the work they do. After talking a bit, we found out that Don Deankins and Caroline Woerner were the one and same people that had made the maps we were following. They also found out that we were the Outcasts and we were amazed by how many people follow our Blog. After we left their company, I wished that we had taken a picture of the group to put on our Blog.

After Posey Point you hike the side of the mountain over Big Soddy Creek. We did spend a little while checking which way to go after the pine farm where the trail splits and there is no sign. The next marker is down the switchback from the split. This is about the time Marco’s knee started bothering him real bad. Part way back into the Deep Creek Valley we started wondering if we were going to have to stop our hike and carry him out. He wanted to be tough and keep going. I think he only fell about five times on the way down to Deep Creek. Not too bad for Marco.

On the way down to Deep Creek you pass in front of an old coalmine portal with the timbers still visible and at this time water filling the bottom.

The only part of this trail that is difficult is the crossing of Deep Creek and Big Soddy. The switchbacks are short and the drops or climbs are steep. Hopefully when they get the bridges done they will rework the switchbacks and bring them out further.

Deep Creek is a large boulder crossing of the creek where Big Soddy is more wading. The only pain you felt while crossing is anything that touched the water. I was hoping for numbness, but none would come.

In between Deep Creek and Big Soddy creek Marco tried to break his leg, the good one, by dropping his foot down between rocks and falling backwards. This gave everyone a good scare.

It was getting dark so just after we crossed Big Soddy and got our feelings back, we made camp for the night. There is no flat area around here so we camped on the slope. It’s nice when you have hammocks. It is a little rough collecting firewood at a seventy five degree angle. Marco did some meds and rehab while we told lies around the fire. We had a full moon and the temp stayed around 35 degrees.

We started out the next morning hitting the trail at 9:00. It was a good climb after breakfast, the way we like it. The trail continues along the side of the valley.

There was one large shelf that the trail actually goes under. We had been talking about how boulders have fallen in the past and how people have been killed. Well, as Marco was hiking under the shelf, a large clump of ice broke off the top of the cliff probably around fifty pounds of it. It was safely out to the edge away from the trail as I saw it fall, but poor Marco didn't know what happened and just assumed he was dead when it crashed to the ground. It was entertaining to watch.

We stopped for lunch at a spot just past the last bridge which would make a good campsite. It was along the river bank and you could tell where a couple of people have camped before.

The rest of the trip was pretty uneventful. The trail covers alot of different type of forests and you end up hiking out along the highway and down Heiss Mountain road to the next trailhead. There were cars there when we dropped our truck off and then more cars there when we got to our truck Sunday. Must be a popular day hike out Possum Creek segment.

When we got back to the Mowbray Pike trailhead we had a note on our truck window stating "This is private property, do not park here" written on duct tape. It looked offical redneck. I will have to find out more about this.

The only wildlife we saw was the cows out in the pasture by highway 111.

Pictures
Posted by THE OUTCASTS at 2:32 PM 2 comments: