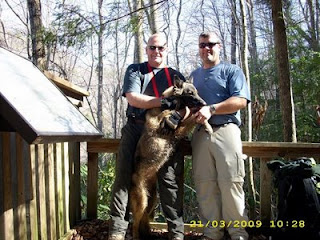 We didn't mean to out run the horses!
Troy and I were the only ones that could make this hike. We headed out after work and made our way, after signing in, to Leatherwood Ford Trail head parking. We got on the trail at noon. We used 100 Trails of the Big South Fork by Russ Manning for our trail description. There is a lack of signs on these trails, but they do use metal trail markers which are few and far between. Red for the Loop trails and red and green for the river trail.

Angels falls trail is an easy hiking trail running along the Big South Fork Cumberland River to Angel Falls. River Trail East connects Angel Falls with Station Camp crossing. We did have two creek crossings that required the donning of the old Crocks. The weather was beautiful and it only called for rain on our second day. The sun was shining, the birds were singing, and the ticks were after us. Yes, there were plenty of ticks on this hike.

That evening as we started looking for a camp site, we walked into Station Camp Crossing. There are a few camping sites here and Station Camp Road ends here. It was 5pm and we were ready to eat.

We set up camp, collected fire wood, got our water, and settled in for the night. It was only suppose to get down to the mid forties tonight. The owls were out tonight and a friendly coyote called in the night. About the time we got ready to call it a night, here comes the truck. It was a few young kids out having some fun. Luckily they didn't stay long and we got to bed around 11pm.

We got up the next morning and no rain. Yes, things were looking good. We only had a coyote visit during the night and he just headed right through camp. I got some pictures of the Station Camp Crossing which you can only cross the river during dry weather. At 8:15am we headed across the parking area and started the 600 foot climb into the hills on the Big Island Loop.

We made it to the Indian Dome Rock house around 11am. It is basically a cave like opening with a big room that has a dome shaped ceiling. Pretty cool to check out. We hiked an hour longer, got on the Pilot-Wines Loop trail and did lunch at a creek crossing. This is when we hung out our stuff to air out and also where I left my clothes line.

I went to the creek, found a deep spot to fill my bucket, leaned against a tree and reached out only to notice that I got no resistance from the tree and it followed me into the creek. I looked like a cat heading into a bath tub. I was reaching and scratching for anything that I could get a hold of. I managed to get only minor wetness of the foot during this episode.

As we finished lunch, a light mist began to fall. We packed up, put on the old poncho and headed out. The mist didn't last long and we had a beautiful day to hike.

We stopped at the Station Camp Horse Camp Trail head parking area. It is a very large gravel parking area which would make a good spot to park if you were hiking the Big Island Loop or the Pilot-Wines Loop for a day hike or overnighter.

After we left there, we came upon the Wilderness Resort, which we found out later was privately owned and operated, but has access to the Pilot-Wines Loop trail. It looks like some fancy log cabins and a large horse stable. For hikers there is a water source at the barn.

The last source for water before Pilot Rock is a creek that runs along a rock bluff just past the private land. We got lucky and found some water right at Pilot Rock and spent the night at the camp there. We ended up hiking 15.3 miles by the time we found the water source to camp by. We must have looked pretty bad because the vultures were circling us when we made camp at 4:30pm. Did I mention that the ticks were out?

There was ice on the water buckets the next morning. We had slept in an extra hour so we got on the trail at 9am. After Pilot Rock the trail drops 600 foot to the Grassy Branch which we got to try out the old Crocks again to cross. After crossing the river we did the 600 foot climb back out to join the Big Island Loop again.

The cabin is a good place to stop if you can work it into your hike. It has two bedrooms and a loft for sleeping. There is a big fire place and a picnic table inside the front room.

We left our horse riders and headed down the trail. They caught back up to us after going back and finding a lost jacket. They were surprised on how far we had made it. They said that we were more like trail runners than hikers. Well, we really impressed them when we came hiking into Station Camp crossing and they were there taking a break. I wished that I would have known that we were going to catch up to them. We would have picked up a couple of old beer cans and walked in drinking beer. Their reaction was "Holy Sh_t, I'm going to have to get a set of those hiking poles" when we walked up on them. They asked how much further we had to go and I told them that we had 8.1 miles to the truck, but only had an hour to get there before dark. You should have seen their faces then.

To avoid any more visitors we hiked down the River Trail East for a couple of miles before setting up camp. We got in a total of 14.2 miles by 5:30pm. We found some ticks and listened to owls as we sat around the fire.

We got up in the morning and hit the trail by 8:15am. We did have a small layer of ice on our water bucket this morning. Just before Angel falls we saw some people camping along the river and after Angles falls there were people all the way to the truck. A good day for hiking. We got to the truck by 11:30am.

Pictures
Posted by THE OUTCASTS at 4:53 PM No comments: