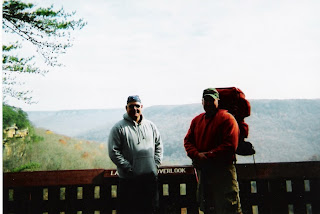 The Stone Door trail is a trail that Greg had taken several times. Troy voicing his concern about the bad knees was reassured that Greg had taken an Obese couple on this trail and they had no problem making it as a day hike. Looking over the topographical map I made note of a steep descent and a slower but pretty good climb back out of Gorge, but after Greg's reassurance we decided to go with it. We did have some concern about water on this hike. That concern soon faded as the week of our trip, it rained and it rained consistently for a week. We then had a concern about dry firewood.

The rain stopped on the morning of our trip and we headed out. We met at the trailhead and Greg got us off to a good start with an MRE for everyone. This was Troy’s first experience with this kind of delicacy and just a flashback for me. The trail was beautiful as were the views out over the gorge. The Stone Door is a large crack in the rock, which has steps in it that take you to the bottom of the gorge. Once you go through the stone door down into the gorge the trail turns into a rock garden, which you would have no idea that there was a trail here had it not been for the trail markers on the trees. Once the trail hits the river it follows it the length of the gorge. There is a trail to another waterfall that we could not take because the river was up so high and flowing very rapid.

There was a wagon trail that followed the river. You are on and off this wagon trail many times until the climb out which is rather steep and requires a few breaks. Greg had a hard time recalling the ups and downs and stone hopping. He remembered the wagon trail, but didn't recall it being so steep on the way out. The thought occurred to me and I asked the simple question "Did you have a pack on your back the times you hiked before?" After a slight hesitation the "No" answer came back. He had always taken it as a day hike.

Troy nicknamed the climb out as Mt. Mother. After being assured that there was no water at the camp, I filled my gallon container with water before the steep incline to the rim and camp. I later found out that during our breaks on Mt. Mother, Troy was not interested in the rock formations that I was pointing out. I believe he was just tired of hurting and a little air was more important than my damn rocks.

When we got to the top you couldn't help but to hear the raging river that was flowing next to the camp. "I never saw that before" was the answer. The campsite was on the edge of the gorge. It is a beautiful location, but due to the temperature we decided not to camp too close to the edge with the wind blowing. We set up camp and the meds were taken. One other couple made camp at another site. They obviously didn't have the experience we had in making campfires. We saw a small flicker every now and then. Ours was more like a sunrise. While sitting around the campfire, we heard a truck pull up. A ranger walked over to our camp and asked if we had a permit. We shockingly said yes and then he wanted to see it. None of us had ever had this happen before. Anyway, we gave him a hard time about not having any wood at the campsite. We managed a good nights sleep.

The next morning we decided to check out the water falls. Right at the start Greg decided to test the water proofing on his boot as he crossed the none existent river next to the camp. I guess waterproof is a loose term and doesn't apply when the water is over your boots. A short period later Troy decided to head back to camp as the knees were complaining. This was the last time we saw Troy as he headed all the way back to his car and exited stage right.

With all of the rain, the waterfalls were amazing. One of the falls had a metal spiral staircase that took you to the bottom of the falls. The dog was a little leery of this means of going down, but did make it safely.

When we got back to camp we saw that Troy had gone and we hiked the rim trail back. More beautiful sites were had.

Back at the office we decided that this was not a beginners trail and we would start working our way back up to this level by taking easier trails first. We got online and found all of the State Parks in Middle Tennessee that offer overnight trails. Then we put them in order from what we felt would be the easiest to the most difficult. The lightweight backpacking was now getting serious.