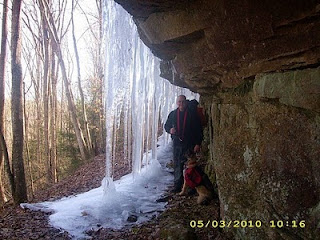 Well Marco is out for the season with his ankle. Troy, Shadow, and I went ahead with the five day hike scheduled for the Sheltowee Trace. Since Troy got picked up at Camp Wildcat on our last hike, he wanted to start again from that location. I just wanted to hike so I agreed and that is where we started.

Aaron from Holly Bay Marina dropped us off. As he was driving the three miles up the one lane road to Wildcat, he said something about this being a rough road with all the pot holes. I told him that this was the easy part. The hard part would be backing all the way back down to the main road. What a look I got. Troy jumped in and said not to be so rough on the man. There is a turn around on the top. Aaron said that there were no bets being placed this time as the weather was too good.

Off we went. Got on the trail around two o’clock. The 2.8 mile section of trail between 4078 and 490 crosses Denny Branch 24 times. This is where the “two seat” hunting stand is in the woods. Two car seats mounted up on a platform. We stopped before the last two crossings and made camp. It was a wonderful night with the stars shining. This was the coldest night in the low twenties and we had frost on the inside and outside of our tarps.

We got up a little late this morning. We hiked up the hill and back down to Parker branch which we just rock hopped this time. Then we hit the pavement. What is worse than road hiking? Road walking with spiders! I guess that spiders think it is spring. They were all over the road. I guess that We hiked 490 to 89 and this time just kept going on pass Horse Lick Creek, knowing from our previous hike that the water was too high to cross. I was going to take a picture of the shed by the road with the stove pipe coming out, but when we got there the man was standing outside. He had hair down to his waist and a beard to match. The only way to tell his front from his back was the nose that stuck out. He seemed like a nice guy as he said hi as we passed.

We cut off the road and took the four wheeler trail up to 431. Some more road walking, all the way to S-Tree campground. We knew that there was no water at the campground so we hiked to the Sheltowee and headed west a half mile to Raccoon Creek. We made camp there. Some cough medicine was taken and lies told. This was the night that Troy threw his raisins into the fire. Actually, his stove did as he laid them on top of it and when it came to a boil the lid bounced and the raisins flew. That night the coyotes sang to us.

The section from S-Tree campground to Turkey foot campground is open to four wheelers and motorbikes. I would suggest that you do not hike this section on a weekend. Especially on a really nice weekend. We got to see a lot of both. The trail is in good condition and only needs marking at intersections.

We stopped for a good old creek bath before 421. Luckily we managed without being interrupted by four wheelers. After we crossed 421 and hiked the road the trail heads off by Elisha Branch Road. Troy wanted to walk just a little farther up the road. I was trying to see what he wanted. Finally he said that he had found a restaurant on line that was supposed to be right in this area. We found out that it had moved down town.

We collected our water from Elisha Branch then hiked up the mountain and camped on top. We had an owl talk to us and then it was a peaceful evening.

We slept in again and then headed out. The trail follows the road most of the way. After you get away from the road it goes downhill and follows the middle and Elsam fork. Since we were a day early getting to Turkey Foot, we called and Randy was able to pick us up that night. We hiked another two miles up to 587 to meet Randy and of course he came in the other way off 89.

Pictures:
Posted by THE OUTCASTS at 8:45 AM No comments: