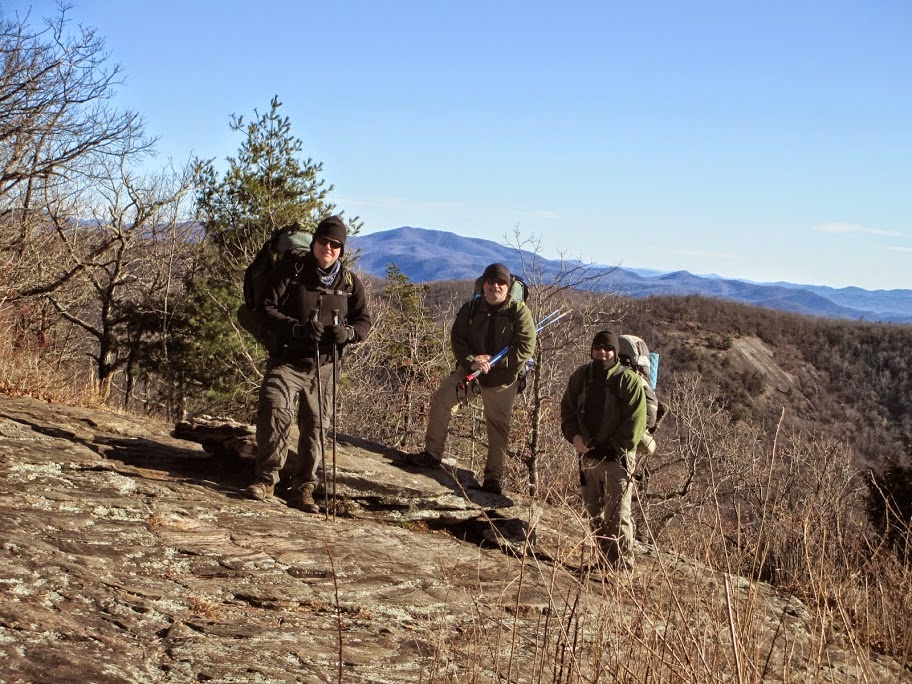 The three of us headed back to the Appalachian trail to continue our adventure.  On the way there we saw a first.  We have all seen the single and double wide house trailers.  This time we saw a double long!  They had welded two different size and shaped house trailers together end to end.  Now that is something worth checking out.

We called Sam Duke 706-994-6633, for our shuttle to Neels Gap from Dick's Creek gap where we left the car. As usual he provided us with good entertainment on our drive.

For some strange reason we left the day AFTER the snow and freezing ice?  As a matter of fact this was the best weather that we have had for an extended hike that I can remember.  Clear nights with shooting stars on top of that. It felt like we were getting away with something. The Southbound thru hikers were coming through and we met a bunch of them all through our hike.

We started the first evening with a strong wind and made it to Baggs Creek Gap for the first night. The wind blew all night long and it blew strong. We had quite the fight with the tarps to set them up, but even after we got a fire going, it just was not worth it.  Too cold and relentless.  We called it an early night.

The wind had died down so we had a fire to warm up to this morning. Some time in the night our bear bag holding tree gave up on us.  When we got up the branch had broke and the bags were hanging about waist high.  Glad we didn't have any visitors last night!

We headed out for some more mountain views. From Tesnatee Gap the climb is absolutely brutal. The good part is after the climb, you just cross the road again.  We stopped and got water here.

We met an elderly lady thru hiker.  She had a guy hiking with her for a few days.  We asked the question "what are you going to do after finishing the trail?" She said she was from Vermont and was going to get some exercise going down hill skiing when she gets home. There is always someone on the trail to put you in your place!

We planned on stopping at Poplar Stamp Gap for the night.  We found the campground, but never saw the water marking so we hiked on to the where the trail turns and found some water.  We camped off trail that night to stay out of the wind.

We had a good fire for breakfast and then got back on the trail. More good views for today!

We passed another older man thru hiker today.  We told him we had seen alot of thru hikers and he jumped back with "none of them my age."  So I had to tell him the story of the elderly lady.  He just dropped his head and said his plans were to sit on his butt!

We got up and headed out after a good nights sleep. There is nothing at the Cheese Factory Site at all. No foundation or any sign that there ever was anything ever there.  Our big climb today was Tray Mountain.  The view was wonderful from the top and we stopped by the shelter to collect water and have lunch.  We went on to Sway of the Blue Ridge for the night.  We had to carry water from the shelter, but we had a good campsite and plenty of firewood. There is water at Steeltrap Gap with a sign, but is not shown on any map that we have.

We were standing around the campfire, when we heard something coming through the dry leaves.  It was big and getting closer.  We flashed the lights in the direction and saw a hunting dog coming at us.  She was a friendly dog and we found a number one of her collars.  We called the man and asked him if he was out hunting. He told us that he was out a couple of days ago and we told him we had his dog. He did not know where we were camping and asked if we could walk her out tomorrow. We tied the dog up and she laid down and was done for the night.

We got up and ate around the campfire.  We packed up and took our new friend with us.  She walked great on the leash so we let her off and she just walked along with us.  We climbed the steep side of Kelly Knob.  Some where along the way the dog picked up a scent and was gone.  We heard her bark as she went over the ridges.  We figured she was gone, but kept on whistling for her as we went on. Somewhere about a mile down the trail she came running up from behind and stayed with us the rest of the way.  We stopped at Deep Gap for water and then about two miles out we called the guy again and told him where we were and he met us at Dicks Creek Gap.  We found out our friends name was Missy.

Pictures:
Posted by THE OUTCASTS at 7:00 AM No comments: