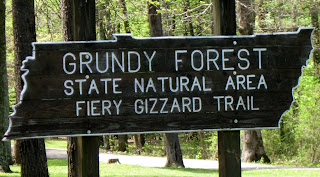 Marco and I headed out to hike the Fiery Gizzard in Tracy City.  We dropped our car off at the trailhead and then headed to Foster Falls to start the hike.  There were no cars at either parking area so we figured we might have the trail to ourselves.

We started at Foster falls and took the trail down to the bottom of the falls.  We had a big rain so the falls were wonderful.  It was a little wet with all the mist at the bottom.  We walked along the famous climbing walls and took the second exit back up to the Fiery Gizzard trail.

Just before we got to the first campsite, we came across three different logs that had been torn to pieces and scattered across the trail.  So if there were any questions, Yes, there is bear in this area.  The logs were over five feet long and two foot in diameter.

We visited all the overlooks and water falls on the trail.  The trail follows the rim of the gorge except where it drops down to Laurel Branch.  Right before we got to Anderson Falls there is a newly build shelter with a sign on it about "Indian Rock Campground" which is new.  I have no information other than the sign.

At Anderson Falls we took the 196 steps down to the base of the falls.  A good work out it is!  This is also your water source for the campground.  When we got to the Raven's point campsite we found that there were now fire pits in all the sites.  Yes, you can now have fires as the private property now has a new owner.

Shortly after we got to camp another backpacker came in.  He was looking for the building where you check in at.  Ben was a brand new backpacker from Cincinnati Ohio.  He had ran the half marathon in Nashville and now was doing a little camping.  We spent the evening visiting with him.  We hiked down to Raven's Point to see the sunset before heading back to camp.  We took Ben over to the falls hoping that the lights would work on the stairs, but they didn't.  He had to go back the next morning to see the falls.

Marco surprised me with a burrito dinner.  The fancy trail dinner turned out a success.

The next morning we parted company and headed down into the gorge.  The gorge was covered with wildflowers.  Lots of water falls and rock formations. Marco danced all down the trail.  He is always so happy:)  This is considered the hardest part of the trail do to rocks and elevation changes.  It is also a very pretty section of trail.  We passed the only other person on the trail when we were leaving close to the end.

We stopped at The Lunch Box in Tracy City for our lunch.  They got some really good food.  After that we headed back to Foster Falls to recover our vehicle.  There were probably ten cars in the lot most of which were rock climbers.

We hiked the beginning section of the Cumberland trail on Signal Mountain, the River Gorge Segment.  Marco, Travis, and I headed out after working our shift.  We dropped a car off at Prentice Cooper WMA at the Main trailhead and then headed to Signal Mountain.  The streets on Signal Mountain were a little confusing, but we finally agreed where we needed to be.

There is a parking area and a big paved overlook area with views of the river valley at the trailhead and plaques describing the history behind this place.

After we got on the trail, the first overlook was the cove of the 95' Julia falls.  It is a pretty falls that is a long way away when you look across at it.  Then about a mile down the trail you come to the side trail that leads to the bottom of the 40' Rainbow falls.  This trail is really steep and there is a rope tied to hang on to as you descend to the bottom.  There is a beautiful pool at the bottom of the falls.  As we were exploring I hear a loud noise over the sound of the falls.  I look over and Travis is laying on his back on a large boulder.  He decided that the rock may have been a little slippery.  I told him to hold still while I took his picture but he got up anyways.  Marco had volunteered to stay up top to "watch the packs".

After a vigorous hike back up to the trail, we headed off with Marco in lead.  Soon the trail turned into a creek bed and we were climbing over downed trees.  I look down and see a trail runner go by.  I pointed this out to Marco who said he was on the trail.  I mentioned the fact that the trail runner was probably on the trail as he was making some good time.  So we descended down to the trail and continued on.

Halfway up the gorge you hike next to Lochart Arch and then you cross over the creek leading to Julia falls.  After that you come to Edwards Point overlook which again gives you a scenic overlook of the river valley.  The trail follows the gorge the rest of the way back to the rock formation known as Mushroom Rock.  You cross many creeks along the way.  Mushroom rock is an amazing formation that has been standing up to the test of time.  Unfortunately, some people cannot keep themselves from marking on natural land forms.  From there you drop down to North Suck creek where our campground was.

We collected fire wood and then did some cleaning up in the creek.  Life was good!  Then the trail runners came through, one single and one couple.  The campsite is not as far from civilization as we had hoped.

Travis got the fire going and before long we were eating dinner fire side.  The owl started early and was loud enough to hear over the creek running.  The clouds cleared out that night as the stars came out and we told lies and took cough medicine around the fire.  Everyone left their tarps off so we could see the stars through the night.

The next morning we got up and headed out.  The trail crosses Suck creed road which is a well traveled road and then you climb the stairs into the Prentice Cooper WMA.  The trial then follows the gorge up to Popular Springs campsite and Lawson's Rock overlook.  As we turned to walk out to the overlook there was a flat spot on the trail where Travis decides to twist his ankle and hit the ground.  I quickly pointed out to him that it was better to do it there instead of at the overlook.  So, while he rested at the overlook, I went looking for the campsite.  I crossed a dirt road and walked about fifty yards into the woods where there was a dry creek bed.  Then I came back an consulted the map.  The campsite is a ways off the trail anyway.

From the overlook we continued along the gorge with many many different rock formations.  There is numerous chimney rocks which are really cool to see.  Many more creek crossings and one flat area that Travis fell for the third time.

We ate lunch a creek crossing which was just before we got to the Indian rock house which is a half mile from the parking area.  Another great hike on the Cumberland trail.

Pictures:
Posted by THE OUTCASTS at 6:34 AM No comments: