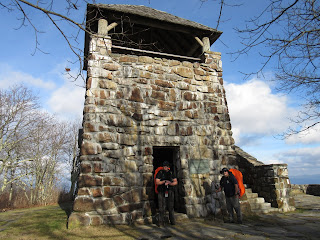 Well we started out our trip with a dead battery in the car. From there it got lots better. We drove up Albert mountain and got started on our five day backpack. Our fist stop was the Long Branch shelter for a break. When we got to the sign for the shelter, there was a turtle on the sign. Troy had remembered a hiking girl that had carried one. He picked it up and it was weighted down so he opened up the zipper and found a turtle full of weed. About that time a guy came up from the shelter and said something about finding his turtle. He was a thru hiker and had stopped for a break at the shelter. After visiting with him, he took his turtle and left. We continued to the shelter where we found lots of stuff left from other hikers. This is a new shelter built in 2012. It had mouse traps and a collection of mice piled up where someone had some fun hunting.

We continued our hike and finally made camp at the Rock Gap shelter where another individual was already staying. Kokoro was good company that night. He was impressed with the amount of wood we collect for our fires, but enjoyed it with us through the night. He is hiking the trial spreading the word of God to those interested. We heard lots of owls that night.

We got up and headed down the trail. It was another beautiful day for hiking. We got to see an owl on the trail today which is always impressive. We stopped for lunch at the campsite just beyond 64 and then continued the climb up Siler mountain.

The Siler Bald Shelter is a half mile off the trail located with a field next to it. The campfire ring was sitting about three feet high on a pile of ashes. We did a little trail work and spread the ashes out and brought the fire ring back to the ground. After setting up camp we sat down at the picnic table for dinner. Halfway through Marco jumped up screaming. He did a very complicated dance as he was telling us that something had run up his pant leg. We found a mouse that kept us entertained through the evening. He kept running all around the picnic table through the night as we enjoyed the fire.

The wind picked up to tornadic levels that night. Most the night we listened to the tarps flapping hard and hitting the side of our hammocks.

We woke up today to lots of heavy fog and water dripping off the trees. It rained lightly on and off all morning. We did not do the side trip to Siler Bald as you could not see it through the fog. Rain gear was deployed.

The gravel road 69 comes close and follows the trail along side. We stopped at the spring on 69 for lunch. We had the peaceful sound of lots of gun fire coming from the firing ranch down the road. It's a good climb to Wayah Bald, but worth it as the views from the tower were amazing. We met some motorcycle riders that stopped to check out the tower. We all made calls home from the tower to give updates on our whereabouts.

We continued on the trial to Licklog Gap for the night. There is no blue blazes for the water here, but we knew it was about a half mile down to the West. The only problem was all the hunters between here and there. Finally we just had to disturb them. They were extremely friendly to us and lead us to the creek before heading to their truck. We set up camp halfway down to the water. That night after dark another hunter stopped and visited with us on his way to his truck. The wind was easier on us tonight, but we could hear it blowing up in the Gap.

I was going to send out a message to Dad, who was also our shuttle driver, about our guesstimate on getting off the trail. Turns out that my phone was dead. Troy checked his and his was dead as well. So we had Marco's phone, but no phone numbers to get a hold of my Dad. Took a few calls before we finally got his number.

The weather warmed up today to just about too high. We stopped at the Cold Spring shelter which is literally on the trail for a snack.

We had the serous climb up Wesser Bald. I heard some little girls coming down the trail. There was two of them and then two more. Finally a Dad and girl came by. She yelled out, "I see a hiker". The dad had told them about the trail and thru hikers and she was so excited about seeing us with our packs. We continued up and climbed the Wesser Bald lookout tower to enjoy the wonderful views.

From the tower we headed down to the Wesser Bald shelter for the night. Another great night telling lies and taking cough medicine around the fire.

Pretty much all downhill today. We got the views from the "jump-off" and stopped at Rufus Morgan shelter for lunch. Dad and Mom met us at the NOC and took us back to our car.

After the hike on the way home we stopped at a gas station and Troy bought himself a drink which the man charged him $2.19. Marco stepped up and the man said "so you are the Outcasts, tell me about it" after talking to him the man charged Marco $1.19 for his drink. It pays to be famous!

Pictures:
Posted by THE OUTCASTS at 1:07 PM No comments: