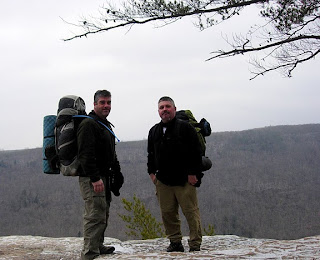 The original plan was a five day hike at Frozen Head State Park. Marco was recovering from a five day illness and Troy called in sick. With the bad planning on my part, I had scheduled a hike on Superbowl Sunday, we went with plan B.

Marco and I headed out Tuesday to Savage Gulf. There were some trails there that he had not hiked and I had never made it to Ranger Falls. We started at the Stone door ranger station and hiked down through the Stone Door and took the Connector trail East to Hobb's Cabin. The Connector trail is described as the most challenging and strenuous trail in the Savage Gulf Natural area. Several Climbs and seemingly endless rocky slopes are crossed.

The weather was great for hiking. They were calling for 3 to 4 inches of snow the next evening, but the sun was shining today. We kicked up two flocks of Turkey before we got to Saw Mill campground. At Saw Mill campground we stopped and had lunch. We made it to Hobb's Cabin and had plenty of time to search for firewood. The Ranger had said that last weekend they had thirty some people at Hobb's Cabin. The woods looked like they were vacuumed and we had to go a distance to find some wood. We got camp set up and the fire started in time to enjoy the evening and watch the stars come out. It got down to nineteen degrees that night.

The next morning we got up, had breakfast, and then started down the trail back to the Big Creek Gulf Trail. At Saw Mill campground we kicked up the two flocks of Turkey again. We ate lunch here and then headed out.

We got to the Big Creek Trail at one o'clock and headed to Ranger Falls. Big Creek Gulf Trail is described as this rough, challenging trail leads through the gorge below and to the west of Stone Door. Due to its difficulty, an overnight hike is recommended, although it can make a long, tiring but rewarding day hike.

I couldn't get across the river last time I was here. The river was down so we rock hopped across and got to see the falls. It was cold here and the trees all had ice on them. We stopped for a snack and then headed up the gulf to Alum campground.

When we got to the campground our original plan was to camp. Instead we filled up on water and headed to the car down the Laurel Trail. It started to snow on our hike out. Knowing they were calling for three to four inches we decided to head home and not have to drive through the snow tomorrow.

Pictures:
Posted by THE OUTCASTS at 10:09 AM No comments: