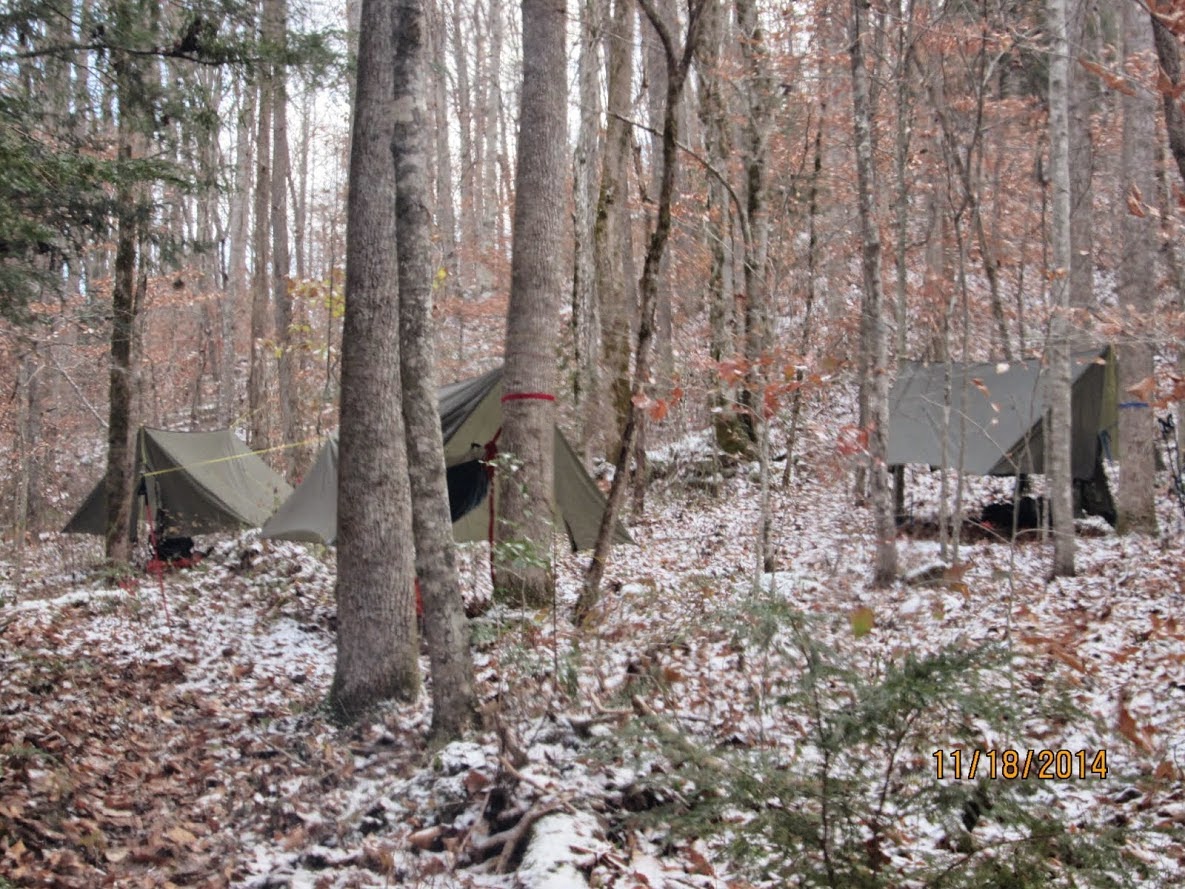 For some reason the weather changed and there was a great Northern freeze moving in.  As usual the closer we got to Big South Fork the more snow was falling.  It started building up on the ground.  We stopped by the Hitching Post to pick up a camping permit.  The man there said that the park had come in when the government shut down like the Nazis and confiscated all their permits and records.  We said OK and headed to the park headquarters.  The Ranger had put all the permits away for the year because of the weather, so he had to go to another building to get them.  I told him that we had tried to get one at the store and he said that they pulled them from some stores.

The ranger then started teaching us about picking out trails after we convinced him that we were not here to hunt.  "Well you guys are the second third and fourth person to stop by.  The first one bought ice."  He showed us a lot of trails that he likes to recommend.  Most of them we had done, but he did teach us about downfalls.  There is a "Bear" downfall and a "Giant Oak" downfall.  If you come across a downfall and I don't mean a tree that a bear dragged across the trail, but a giant Oak that you cannot get around or over, call him and he will get it on the list to be removed.  After all these years, we are still learning.

To the trailhead we went.  Different than the last two times in Big South Fork, we didn't start in a major snow storm this time.  The temperature was dropping and it didn't take us long to get an old fashion foot washing in.  The water was up all over so we dropped the shoes and did a little barefoot wading.

This is a horse trail, but we knew we didn't have to worry about seeing any hawses on the trail today. We were told that after it drops down to freezing they have to put those animals in the barn.  It does make it challenging to hike on frozen hoof prints in the mud.

This trail drops off into the river gorge and you walk along the Big South Fork river.  There is an Indian "Dome" rock house, a old Ford car upside down, and an old cabin on the trail to check out.

We found a place to make camp along the river out of the wind.  The temps dropped down to 17 degrees, but Troy kept the fire up to around 70 degrees.  We had a good evening telling lies and taking cough meds.  Sometime in the night another inch of snow dropped on us.

Troy woke up to a loud "thud".  He thought he heard some grumbling and then another "thud".  He asked Marco if everything was alright and heard more grumbling.  He asked again with the same result and then  screamed "Marco are you all right?"  More grumbling so he got up and yelled "Marco are you all right?"  This is when I woke up too.  Marco yelled back "I fell out of my hammock!.....  Twice! And couldn't get out of the bug netting."  Lot's of laughs.

The next day we got to see the car and cabin.  They had built an outhouse at the cabin since the last time we were here.  It's a two holer which would make any man proud!  We though about crossing the big river at the two crossings we came to just for practice, but then decided against it.

Another good hike!  When I called to let Lora know we were off the trail, she said that they had closed all the schools in the area for the last two days due to the weather.  We apologize to all the parents out there.

Pictures:
Posted by THE OUTCASTS at 6:37 AM No comments: 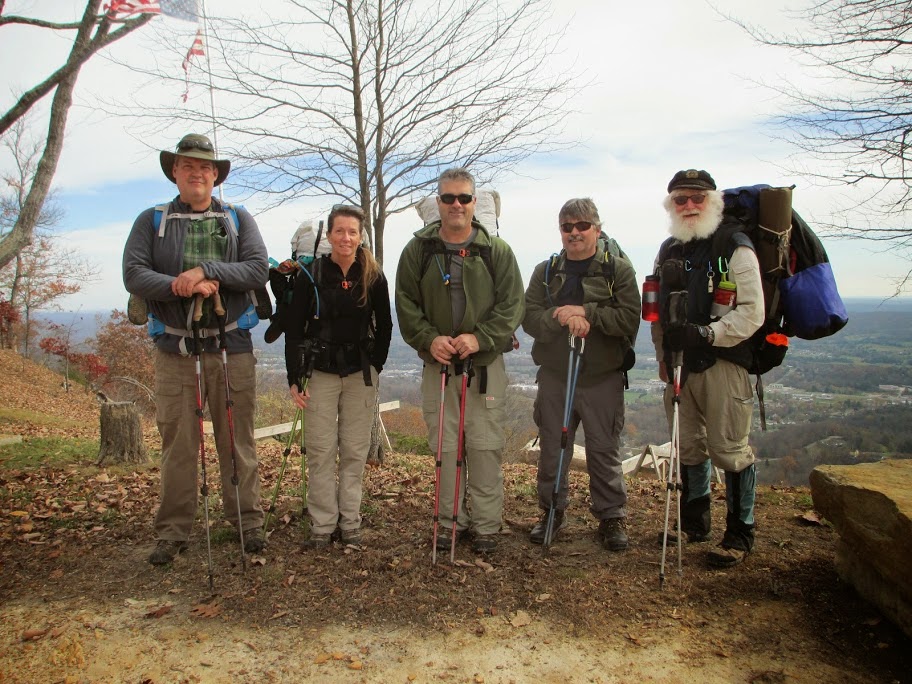 
We had five people do a backpack trip on the Cumberland Mountain Segment of the Cumberland trail.  Eric Luncford, Lora McBride, Craig McBride, Marco King, and Pete Broehl.  This was my first backpack with the infamous Santa Claus.

This is a strenuous hike of a special mountain.  It has two rock formations that stick straight up and run on both sides of the mountain for the entire length. They call it the Devil's Race Track. The trail actually spends a lot of time on top of the rocks.  There are lots of views!  There is also Bruce Creek and Bruce Creek Falls on the lower section of the trail.  There is a shelter with a spring to spend the night at.

We started at Eagle Bluff parking at the overnight parking area 0.2 miles down from the overlook. There was a group of four wheeler riders at the overlook when we got there. They were excited to see Santa as well.  We hiked a total 3.6 miles to the Shelter and camping area.  The rock formations are amazing and the trail traverses across some rock areas that are narrow as well.  There is one rock with a hole going through it they call it the window rock.  There are numerous overlooks all along this trail giving you a chance to enjoy the scenery and take in the color changes.

After we got camp set up we hiked another 0.1 miles to the "Rock climb", which is a large stack of rocks you climb a ladder to get on top of, for an evening view of the valley.

We hiked back to camp and had a great evening telling lies around the campfire.  The next morning Marco got a good fire going to warm us up and eat breakfast around.  We headed out for the Bruce Gap trailhead which is 8.9 miles away.  Lots of up and downs along the ridge.  We ate lunch shortly after the short road walk we had.  We enjoyed the overlook for the Devil's race track where someone has put up an American flag and then we started our downhill trek.  At the bottom we enjoyed the walk along Bruce Creek and seeing Bruce Creek Falls.  Then more ups and downs going towards Cove Lake State Park.  We even saw a large black snake for Pete.

Between the weather, scenery, water fall, and snake, I think we covered everything on every one's list on the 12.7 miles we hiked.  We had a great hike with some great people. 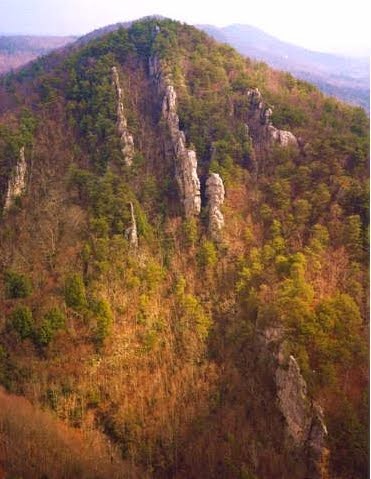 Posted by THE OUTCASTS at 10:55 AM No comments:

AT - Springer Mt. to Neels Gap 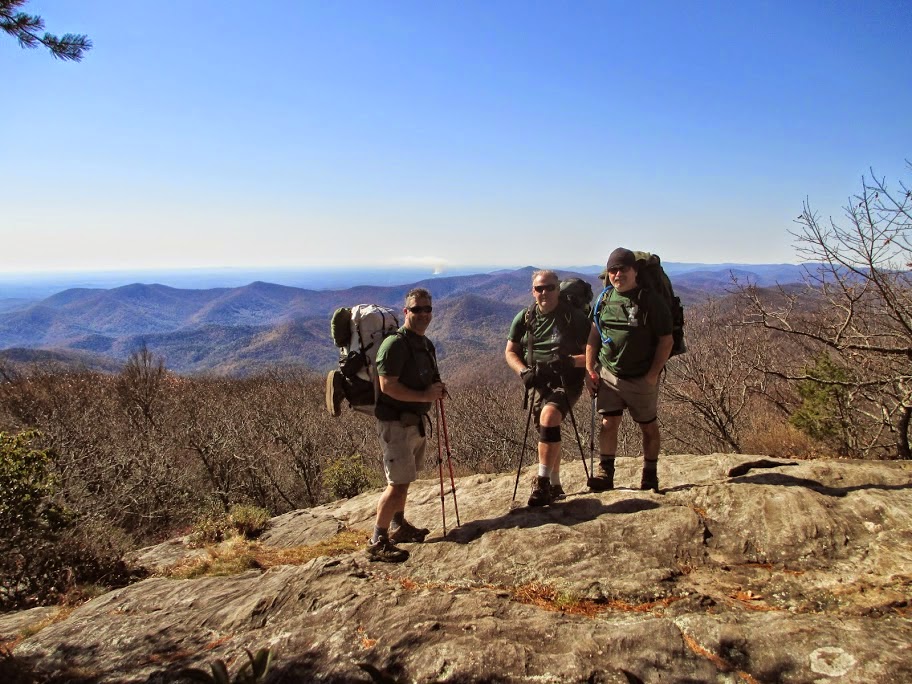 We left Murfreesboro as usual after running all night.  We met our shuttle driver Sam Duke 706-994-6633 at the Byron Reece Memorial Trail parking lot next to Neels Gap.  Sam drove us up to Springer Mountain.  As we were riding I told Sam it makes you feel like your in the middle of nowhere.  Sam answered "you are in the middle of nowhere!"  He was worried about the weather we would be hiking in.  As usual the two days before our hike the weather report dropped twenty degrees and added a 50 percent chance of snow.

Marco and Troy got back and headed out.  The weather was warm and everything was good and dry. We hiked to Three Rivers for the night.  We got wood gathered and camp set up before dark.  We enjoyed a short night around the fire before we just called it a night.

We got an early start knowing it was going to be a tough day of hiking.  Before we got out of camp we met "Screamer".  We didn't ask how he got that name,  but he was hiking to Neels Gap as well so we passed each other a few times over the next few days.  Screamer had forgot his lighter so Troy gave him one.  We also gave him an update on the weather as he did not know that it was going to snow.

You are never alone on the AT. We passed numerous South bounders over the next few days as well as day hikers. Justis Creek was the first water to camp next to so that was our goal.  To make it before the weather kicked in.  We got a light rain on and off before we got to camp.  It cleared up long enough for us to get dinner in next to a campfire and that was all.  The snow kicked in and we called it a night.  The wind blew and the snow fell most of the night.

We woke to an inch of snow on the ground.  We did a cold pack up and headed out.  We didn't see anything of Screamer from his tent.  We planned on getting to Woody Gap for the night.  We saw Screamer at Gooch Mountain Shelter.  He had made it through the night.

Before we got to Woody Gap, a group of hikers told us that we didn't want to stay there for the wind. Long before we even got there we could hear the wind blowing through the gap.  We made a mad dash through traffic in the high wind and continued on.  We met a South bounder that said this was horrible weather and he was getting off at the gap.  We continued on and didn't find any relief from the wind until we got to Lance Creek.

There was another tent set up in camp when we got there, but didn't hear or see anyone. We had to eat under the tarps again as the light snow was coming down.  No fire tonight.

Another cold morning and no wood for a fire.  We got packed up and headed out.  It wasn't long and Marco remembered that he had left his clothes line.  I stayed with his pack as he ran back to get it. Some time in the night I had seen a light on in the tent.  Before I left a man had gotten out.  Marco said that a woman was with him when he got back and that they were heading back out due to the weather.  Just too darn cold.  Today's plan was to get to Wood's Hole Shelter.  We got there in time for lunch.

When we got to the shelter a couple of ladies stopped by wanting to know where the trail was. They were hiking from a program on their phone.  No water or supplies and lost.  We got the map out and helped them find their way.

We had the shelter to ourselves and a great night around the campfire.  Tomorrow was Blood Mountain.

Through the night the weather got warmer.  We heard owls, cyotes, and a couple of screech owls early in the morning. We got up and headed out for the climb.  It was a great day for being on the mountain.  Warm, clear, and light wind! Life was good!

On the way down, I took the side trail to get the car while Marco and Troy headed on to Neel's Gap. When I got to the parking lot there was another backpacker there.  He had spent the night in the back of his truck because it was too cold to camp.  He was heading North, but of course didn't have a map or any idea where he was going.  Another lost hiker!

We visited the store at Neel's Gap and then headed to Blairsville and had a celebration lunch at the Hole in the Wall on the square.  Another good hike.

Pictures:
Posted by THE OUTCASTS at 6:45 AM No comments: