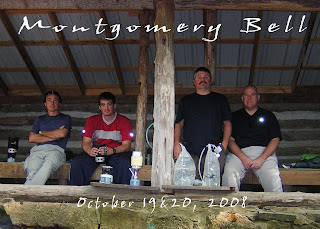 Craig couldn't’t make this trip. He was hiking with his dad in the Smokies so he called on me to lead this. Not sure this was a good idea but the other’s seemed OK with it.

I picked up Marco at the fire hall around 7 and headed toward Nashville. We were ahead of schedule so we opted for breakfast at Waffle House. I had forgotten the directions to the park (not starting out as a good leader) but recovered nicely thanks to Google Maps on my phone. We finished up breakfast and headed to the trail head. We arrived about 9:30 and Troy was already waiting on us. He said he had gotten there 10 minutes prior so we weren’t doing too badly and Taylor was 10 minutes or so behind us. Craig called Marco while we were still at the parking lot making sure his group was going to make it without him. We assured him it would work out one way or another. I searched the ranger station which was closed looking for a sign in. Look, look…..nothing. Then Marco and Troy took a gander and still nothing. So Troy left a note with our tag numbers and away we went. Within 30 minutes I had made a wrong turn. Reviewing the map once more, we figured out where we went wrong and decided to hike the road for a couple hundred yards or so until we picked up the M Bell trail head. All was well and a fairly uneventful hike until lunch. We had stopped at the Wildcat Shelter to eat where we ran into a man, women, and dog hiking out after an overnight trip. We also found the humor of Marco texting Craig and asking if we were on the blue trail or white. And again later if we should turn right or left at the Exxon. Then Marco sent Craig a picture message of the shelter which got a quick reply of “First Shelter”. Ya think? Troy and I would have kept up the charade a bit longer before we let Craig off the hook. The game was over and so was lunch and we started out once again.

The farther we hiked along the water, the less it looked like a trial. A few more minutes and even less trail. We reviewed the map once again and saw that we should have left the shelter and hiked in the opposite direction. Strike two. Once again, we were backtracking a couple hundred yards or so until we picked up the right trail. An hour or so went by before we stopped for another break. Troy tied Shadow (his dog) to a tree and the dog begins to circle the tree. As we are getting ready to leave, I notice Troy trying to lead Shadow around the tree to untangle her. Next thing I know he has picked her up and now Troy and the dog are circling the tree.

We made the Woodland Shelter by 2….much earlier than we expected. Collected the fire wood and realized the fire ring was still hot from the hikers previous. I don’t think Taylor even struck a match to get it going. We made some coffee/tea each and were just talking when WHAM! After a few minutes of investigating we realize acorns are falling from the tree above and onto the shelter roof. Sounded like a gun going off according to Marco. Several more fell during the afternoon and we realize this is going to scare the crap out of us during the night. We each enjoyed a peaceful dinner with the recall of the 5 pound spider story from the trip before. I wasn’t there when it happened but Marco has a great recount if you missed it. My favorite part is when Craig called out “Marco..HELP ME!”

I was going to bake a brownie for dessert only to find that my large pan had a hole in 3 of the 4 corners. Not sure if the holes were a result of folding or riding in my pack all day. Since I already had the brownie mixed up, I decided to try it in my Jet Boil stove. Twenty minutes later I had successfully baked the brownie.

Just after crawling into my sleeping bag I heard a THUD! Wouldn’t find out until breakfast that it was the sound Marco’s body made as it hit the ground. It seems that his knot broke on the foot end of his hammock resulting in the brief fall and the thud as he slammed into the ground. He seemed relieved that it was the foot end and not the head that gave way.

Thirty minutes or so after crawling into my bag I am awakened by a familiar WHAM on the shelter roof. Not as startled as I thought I would be. Though I slept through, the others said they were awakened several more times during the night. I only woke again around 5:30 to find Troy poking at the fire and once more at 6:30 with Taylor stirring the fire this time. It was light out this time so I began the coffee.

Taylor asks around camp to see if anyone else heard the “Coaching” this morning. Troy agreed that he had heard something but wasn’t sure exactly what. Taylor said it sounded like a football coach in the distance yelling RUN, RUN! We finished breakfast and broke camp.

We resumed hiking at 9AM and made great time to McAdow Cabin. I suggested that we could add a few more miles onto the trip but it would require about 500-1000 feet of cross country travel. It didn’t seem too bad to me as it was only an 80 foot elevation change and would be downhill. I was quickly outvoted three to one. Marco was dead set against the cross country part, Troy needed to get out for his daughter’s ball game, and Taylor was ready to eat again. I see why Craig likes him!

We headed toward the parking lot and arrived at 11:30. After the traditional Waffle House post trip meal we called it quits. It was a great trip and I was careful not to get my third strike. Thankfully for the others, Craig will be leading the next hike at Savage Gulf.

Pictures
Posted by THE OUTCASTS at 8:38 AM No comments: