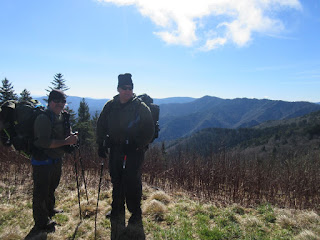 We rehiked this part of the AT for Troy who could not make it before. We had the large batch of Thru-hikers to deal with this time.

Starting on a clear sunny Sunday put us in competition for a parking space at Newfound Gap. It worked out that a car was pulling out as we came through. Off to a good start.

There were ALOT of people on the trail between Newfound and Charlies Bunion. We got an earlier start on the trail than last time and more daylight which led us to getting into our shelter just after dark.

Lots of good views and for the first time in twenty years, we had our permit checked by a law enforcement ranger on the trail. He also notified us that there was a ranger staying at our shelter tonight.

We stopped and ate our dinner on the trail and got into camp around 9 local time. There were many tents set up with Thru-hikers, but room in the shelter.

Day Two:
We got up this morning listening to the ranger bragging about how we came in quietly last night. Then his radio went off saying a major thunderstorm was heading our way. Up we got, collecting food bags and getting water. The ranger stopped long enough to check our permit and then headed out to get off the trail.

With just light rain coming down, we headed out. We had a short distance to go today, but a mile out we got hit hard. Standing in about six inches of water on the trail and lighting hitting all around us. The shelter was full of drowned hikers. Wet clothes hanging everywhere. We ended up with a head count of 18 for the night and a dozen clothes lines. Rained all night.

Day Three:
The sun was out and a great day ahead. We enjoyed the sunshine for a while before it just got hot. As all of the hikers we stayed with passed us by, we started getting new hikers that were heading to our next shelter. When we got to Cosby we were met by a Trailrunner who again checked our permit. Numerous Thru-hikers. Some stopped to eat, some set up camp and then broke it down and headed on, and some stayed. Another night with a full shelter and campground.

That evening we got to hear a couple of owls talking and then in the middle of the night one sounded off in camp.

Day Four:
Once again they were calling for storms. We headed out and had another great day on the trail. When we stopped for lunch we were just a couple of miles from the shelter. Marco and I were making sandwiches when Troy came in asking if we saw the lightening. We dove into our wet weather gear as the rain started. We had rain, but not the rain that the other hikers behind us got into. Made it to the shelter and then the rain stopped for the evening. Lots of visiting with other hikers through the afternoon.

Day Five:
A short hike to a waiting Dad. He had treats from Mom and drove us back to our car at Newfound Gap. We drove into snow and 29 degrees. Our car had about two inches on top of it. There were two snow plows waiting in the parking area to start clearing roads. Off we went.