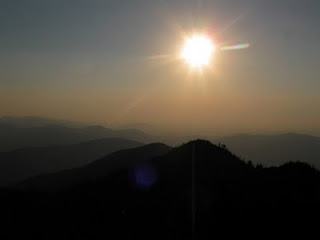 At 6,593 feet elevation, Mount LeConte is the third highest peak in the Great Smoky Mountains National Park. This would be Marco's first hike here and my third.

Marco and I headed out after work to the Smoky Mountains. We stopped at the Ponderosa for lunch. Dad couldn't make this hike so he took us up to Newfound Gap and dropped us off at the trail head for the Appalachian trail. We dropped off the Outcastmobile at Sugarlands Visitor center on the way.

There were a lot of people at New Found Gap. You get a lot of day hikers that go to Charlie's Bunion and most of the people are just there to look at the view. We did meet a through hiker, trail name 501, on the trail that was on his nineteenth day heading for Maine. Mainly we were discussing different foods to take on the trail with him.

We hiked the AT to the Boulevard trail. Once on the Boulevard we saw no more people. The Boulevard trail is a trail full of wonderful views of the Smoky's. It curves just enough that you can see Mt. LeConte most of the way there. We stopped at one of the viewing places to have a snack and just take a break. This trail has lots of ups and downs as you follow the ridge line towards Mt. LeConte.

Marco stopped at one point and asked if I saw that. I asked him what and he said that it was either a bird or a lizard............. I ponder that thought. Later on when we saw a turkey crossing the trail and he asked me if I saw it, I said yes, but it could have been a lizard. I thought that he would feel better if I put it that way. We got a good laugh about that.

We had gotten dropped off around 2:30 and when we arrived at the shelter it was around 7:00. We thought it strange that we were the only ones there. We claimed our bunks and hung our packs. We took our water bag to the LeConte lodge to fetch some water. We talked to some guests there and they said that it was now $120 per person to stay there. From there we hiked up to the cliff top where people go to see the sun set over the mountains. We visited with some guests here as well. After that we headed back to the shelter.

When we arrived at the shelter there were two other fellow there. One was from Nashville and the other Memphis. This was their first backpacking trip and they came up the Alum Cave Trail which is a 5 mile trail. They had gotten on the trail at 10:30 and just gotten to the shelter. We had a good evening of visiting with them, eating dinner, and watching the stars. No campfires are allowed on Mt. LeConte. Of course someone screwed up so they had to make that a rule....people!

The wind picked up over night and we had some wind gusts that blew against the tarp so hard that it woke us all up a few times.

The next morning we got up and had breakfast. There were a few people that headed to Myrtle Point to see the sun rise. We got to see them as the trail runs right by the shelter. After breakfast we said goodbye to our new friends and headed toward the Bull Head trail.

The Bull Head trail was a steady downhill trail for us. The views were spetacular and the wild flowers abundant. We stopped and had a lunch on the way down. When we got to the bottom we took the Old Sugarlands trail, which is an old roadbed, back to the visitor center. There are alot of old rock fences and fireplaces in this area. We also got to see another wild turkey who put on a show for us, puffing out his chest and showing those tailfeathers. The last little bit we hiked along the West Prong of the Little Pigeon River. From the trailhead we hiked across the bridge and to the visitor center.