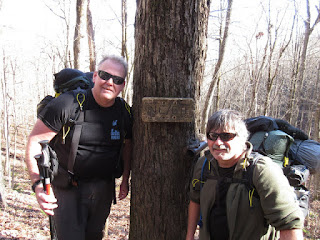 We headed out to meet Sam Duke 706-994-6633 our shuttle driver at Albert's Mountain parking area. Sam is always first. He meets you before you can get there. Sam took us back to Dick's Creek Gap where we started our adventure.

We got on the trail about 3:30 and with the time change, we didn't have much time to hike before dark. We made it to Cowart Gap for our first night. Had time to get camp set up and collect firewood before it got dark.

Day two:
We got up and on the trail by eight. Today's goal was to enter our second state on the Appalachian Trail, North Carolina.  All during the next four days we would be passing Southbounders finishing the through hike of the Appalachian trail.

The Boarder was a good milestone for us at 75.5 miles from Springer. The wind was whipping across the gap when we got there, so we headed down the side of the mountain for the night. This was our cold night for the trip. We had one of our water bags get a layer of ice around it.

Day Three:
Today we started with a couple of good steep climbs. Sharp Top and Courthouse  took a bit of energy from us. After our climbs we had a good day and made it to Standing Indian Shelter. Standing Indian was popular with campers all around the area. We headed on past the shelter and dropped down into the woods near the stream for our camp.

On the way up the mountain we passed a guy and asked him about the lows for tonight. He told us it was supposed to be in the teens. This was not good as we were expecting thirty. It turned out to be warmer than last night.

Day Four:
We started out with the easy climb up Standing Indian Mountain. Another beautiful day on the trail led us to Carter Gap. We set up camp at the site of the old shelter.

We had an older guy with long white hair pass us at lunch time on day two. On day three we passed his campsite by Muskrat Creek shelter. As we ate lunch near the shelter we saw him carrying a five gallon bucket and a shovel over towards his campsite from the privy. We didn't see him carrying a bucket the day before so we figured he was doing maintenance on the shelter area. Well tonight he hiked into Carter Gap and went to the shelter. Later in the evening after we got our fire going he came down to our site. He asked if we were the people that he has been seeing on the trail and of course yep we were. He said that he had hiked the Continental Divide trail. Sooo I said OK?! He wanted to know if we had seen a couple that were hiking together as they were supposed to be back at their car and were over due. I told him about one that I had seen at the Standing Indian Shelter, but they had a dog and his couple did not. They were supposed to be using hammocks and he noticed that we had them too. OK?! Then he was done. I asked if he was doing maintenance on the trail and he said that he takes limbs out while he was hiking. I said that we had seen him with the bucket at the shelter. He said that he borrowed the bucket to shovel out his fire pit, but that it was frozen so he used the bucket to sit on. Then he turned around and left. That was different and left us with a lot of questions.

That night we had a campfire that airplanes were calling in. Thanks Troy! We had another evening telling lies and drinking cough medicine.

Day Five:
Heading out today with the major climb of Albert mountain today. Lots of good views of the mountains and Albert didn't let us down. It was a view that you had to work for! The tower was locked today so we only got the views from the stairs.
Pictures:
Posted by THE OUTCASTS at 10:38 AM No comments: