AT- Walnut Mt. to Watauga Dam 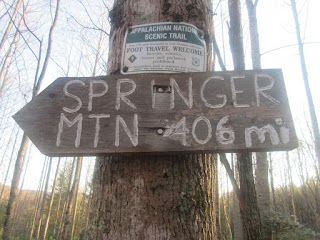 Once again we used Mountain Harbor B&B for a shuttle. We got on the trail and made it to the Upper Laurel Fork foot bridge before dark and set up camp for the night. As we were setting up we had a guy walk up looking for a girl that had wondered off into the woods. We visited with him for a little bit and he went on his way. We got a good campfire going and did some visiting under the bright stars. Later that night we had some deer that were none to happy to have three hammocks in their woods. They blew and blew.

Day Two:
We headed out after breakfast and it was after lunch before the rain set in. All of our views today were white clouds. We were going to have a short hike today to be in a shelter when the predicted storm was going to come in around 2am. After we got everything hanging out to dry, a man and his son came in for the night. They were on an annual twelve day hike and were on day six. They stayed the night at the shelter as well.

Day Three:
The storm never came in. We had some sleet hitting the roof of the shelter for a little bit and the rain stayed steady, but no storm. We headed out in the rain again this morning. Clouds again for views today. Laurel Falls was beautiful and the gorge it is in. Interesting hiking skirting the rock wall next to the river. We had seen the man and son a couple of times today and thought that they would be at the shelter, but no. We had another hiker stay the night with us. He was hiking an Eastern trail which started in Canada, connected to the AT connecting to the Pinhoti Trail connecting to the Florida trail. Sounded long to me.

Day Four:
We had a long steady climb this morning to Pond Flats. Got to hear an owl talk to us and a hawk did a fly by in the woods. On the way up we ran into the man and son coming down. They had stopped at a hostel and got dropped off to slack pack this section backwards. We headed on to Watauga Lake and found that they still have signs up for no camping all through this area for bear activity. We ended up just hiking across the dam and on to the car. Another great hike!

Pictures;
Posted by THE OUTCASTS at 8:13 AM No comments:

AT - Huges Gap to Walnut Mt. 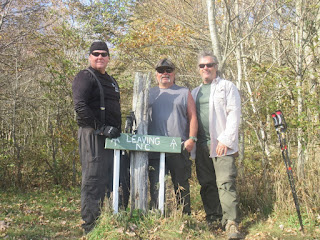 We used Mountain Harbour as our shuttle service again. We got on the trail the day after a winter storm with 22 degree temperatures and high winds. We got off the trail just before the rain came in. Life is good!

We started at Hughes Gap road in the evening and hiked to Ash Gap for our first night of camping. Short hike and good camp. Pretty steep down to the spring.

Day Two:
We got this morning with a cool start. Today was lot's of views after crossing over Roan Mountain. With lots of views comes lots of people. We crossed Round Bald, Jane Bald, Grassy Ridge, Yellow mountain, and on to Over-Mountain Shelter for the night. We got to see lot's of Ravens as we crossed all these balds. We also had to race the woolly worms. They were everywhere, by the hundreds. It is going to be a mild winter as they were mostly brown.

Over Mountain Shelter is a large barn which is the largest shelter on the AT. As we were setting up camp for the night off the edge of a road bed, we had some military backpackers that were bringing coolers up the road from a nearby parking area. They were nice enough to offer us a beer on there way. They were partying for the next two nights. We were glad that we were not staying in the shelter. There was no wood so we had a night around the Lucy Light.

Day Three:
We started the long climb first thing from the shelter. We climbed Little Hump Mountain and on to Hump Mountain, both with balds and views. We made it to Doll Flats for the night. Good spring here.

Day Four:
We got to see some deer this morning and found some more before we crossed Hwy 19. Lots of ups and downs and through valleys. We thought we were going to camp along the Elk river, which we found overgrown. We thought we would camp at the Yellow Branch, which had no campsite with trees. After dark we came to the campsite before Mountaineer Shelter. Finally a place to stay for the night. Another night around Lucy.

Day Five:
We hiked out to Walnut Mountain Road. We had the shuttle drive pick us up. We have now gone over 400 miles on the Appalachian Trail. The end of another great hike.

From Roan Mountain all the way along this hike we could see a large structure with the background of Grand Father mountain and could not figure out what it was. After getting home and doing the google maps I found it to be Sugar Ski and Country Club on Sugar Mt. in North Carolina.

Pictures:
Posted by THE OUTCASTS at 9:39 AM No comments: 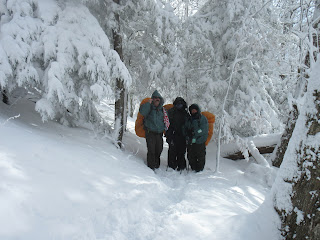 This time we used the shuttle service from Mountain Harbour in Roan Mt. Tennessee. As we drove into the mountains we could see the snow at the tops. They were calling for flurries with an additional inch of snow possible. We started out in 3-6 inches of snow heading our way to Greasy Creek Gap.

We set up camp and gathered firewood as the snow began to fall. It was supposed to get down to 19 degrees tonight. We got our campfire going and ate dinner as the snow continued to fall. By bed time we had to knock the snow off our tarps. Through the night the snow kept falling. Every time we got up to use the bathroom there was more snow. Finally by morning we had an additional 12 inches of snow. It was still snowing.

We got on the trail and started plowing our way through two foot drifts and knocking the snow off branches as they hung across our trail. There was 6-8 inches of snow on the branches. It was a powdery snow so that did help. We stopped at the Clyde Smith Shelter to have a snack and thaw out our bladder hoses.

From the shelter we had 6.4 miles to go to get to our next camp at Ash Gap. It wasn't looking good for time. As we continued to battle the snow we were making slower and slower progress as well as getting more tired. Knowing the snow was not going anywhere and a good possibility that it would get worse as we climbed Roan Mt. we decided to call it at Hughes Gap Road. We called for the shuttle and they came and got us. Luckily they had plowed the road on the side he was coming from.

Pictures:
Posted by THE OUTCASTS at 6:51 AM No comments: 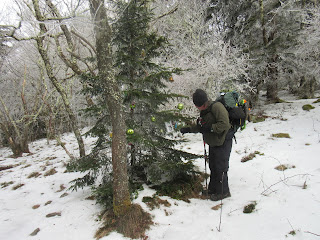