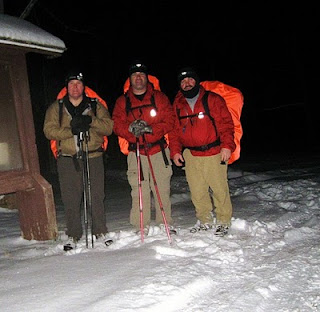 As usual we dug up some wild weather for our backpack. Since this was the last part of the Sheltowee Trace and we have so much time invested in this trail, we dug up a whopper! The snowstorm that shut down the South! What a beginning.

We started the morning with four inches of snow in Murfreesboro. As we were finishing up our shift, we were watching the news as first schools were closing and then roads were closing. As we all gathered at Headquarters they were shutting down I 75 and I 40. We only had to make it to Kentucky.

I took the broom to Troy's car and we made the final decision to go or bust. The interstates were closed, but the back roads were open.....kind of?

We headed off to Cave Run Marina where we planned on meeting Doug and he was going to drop us off at the Cave Run dam where we left off last hike.

Doug was extremely helpful as were all of his employee's at the Marina. He had heads up on our last hike and drove over to the dam to make sure we got picked up safely. He offered to let us leave our car at the marina and he dropped it off at the trail head the day we were coming off trail. Not only that, but he sent us weather reports and checked up on us by text messaging during our hike. We appreciate you Doug!

After Doug dropped us off we hiked down Ky 801 and got back on a trail in the woods. The whole North end is large rolling hills. It's amazing that they found connecting ridge tops to put this trail on. We got to watch two does and a buck follow each other up the hill side from a hill away during one break. We camped just South of US-60 in the woods before Triplet Creek.

I had to use a large rock to break a hole in the ice which was almost 2" thick to get water out of the creek. We got a campfire going and enjoyed the peaceful evening. It snowed.......and snowed....and snowed.....it snowed for the next three days.

Day two:
We got up this morning and just as we were leaving camp, two hikers came down the trail. One was a thru hiker, the other a section hiker and they were both locals. They were getting off the trail due to the snow storms coming. They caught their ride at 60 and we said goodbye. Then the battle was on.

We battled cars and snow plows hiking down US-60, KY 3319, and KY 32. We had seven miles of road and the snow was coming down big time. The fourth snow plow just about buried me and Marco as we ran for the Hardee's which was our last water source for the next 13.6 miles. Since it just happened to be lunch time we ate and answered questions from all the employee's and costumers there.

From here we hike down KY32 to a washout in a rock wall. Yes you climb the washout until you find some 4x4's which keep the trial on the side of the washout. Just for fun, try this in snow and ice......ya, and then add a backpack! The trail here is narrow following the hillside with trees fallen all over it. The next half mile is in bad shape. After that it turns into a four wheeler path and gets alot better. We went up and down and up and down and then when you couldn't get anymore higher we made camp. The only flat spot in the area is where the Eagle trail joins the Sheltowee. Somewhere on one of the downs, Marco landed on his butt. All I knew was that I couldn't catch up to him as he skidded off down the trail. He had some minor injuries and a bent hiking pole when it was over. I was really glad that he stopped.

With the snow falling fast and the high winds, we called it an early night with no campfire.

Day three:
We got up an saw where a coyote had walked by camp in the snow. We had plenty of fresh snow to plow through today. The trail turned into forestry roads and we got to walk them for seven miles. If you had to get water, there is a side trail to Rodburn Campground that is a mile off trail that has water.

Towards the end of the road walk we came across two young men cutting wood and loading it in a pick up truck. They took one look at us and said "Your alot tougher that we are!" We stopped and talked to them for little while. When they passed us a little later they stopped and asked us what kind of boots we were wearing cause their feet were wet and cold.

We finally got off those roads, crossed US-64 and got into some real snow. It was over six inches in this part of the woods. Drifts over Marco's knees or 12". We had a steep drop off into the valley and followed the stream bed until it got deep enough for our water supply and we made camp. This area here could use some bridges as you cross over the creek many times and on steep slopes.

Now I don't know how, but we had stronger wind gusts down here than we had on top of the mountain last night. It pulled Marco's stakes from his tarp out four times. It was uphill every direction that you looked. It was too windy and the snow was coming down too hard to make a campfire. Troy accused me of walking them too hard. He said Marco couldn't even eat dinner and I literally walked the sh-- out of him.

Day four:
We had 11.6 miles to go. Doug had sent me a text letting us know that it was going to be 7 degrees tonight. A vote was taken.....or Troy said that we WILL make the car tonight even if we night hike! So we uhh hiked! And we hiked hard! God had mercy on us. The wind and the snow both stopped or at least slowed down for the day.

We had camped just short of Holly Fork. So over the river and through the woods we went. The climb out of the valley is a steep one. Next you drop down into another valley. We stopped at Clark Park and filled up with water at the well pump. The climb out of there will work those legs as you go back up to the ridge. We kicked up two grouse and a flock of turkeys as we were hiking along.

We only stopped a minute when we came upon two "No Trespassing" signs. One on either side of the trail at mm 275.45. There was a small side trail, but after some investigating we found that the trail goes on. There is another sign at mm 275.73 from the other direction. Must be some bad neighbors. We hiked into the sunset and after dark made the descent down to the Northern Terminus. We had to stop at the bottom and try to climb through a fallen tree just to make sure we earned this trail.

Doug had left our car there so we did the celebration dinner and stayed the night at the hotel.

Murfreesboro must have had about the same strength wind as we did. When we got back, Marco's truck and my car had blown against the block back porch of Headquarters sideways where you couldn't get into the driver side doors. Ain't that weird?

Pictures:
Posted by THE OUTCASTS at 8:51 AM No comments: