AT - Fontana Dam to Clingman's Dome 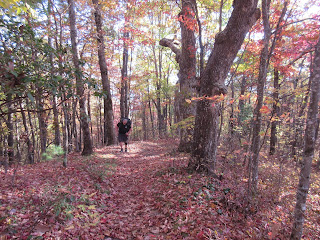 Our little buddy Marco could not make this hike. Troy and I arrived at the Fontana Dam at lunch time. We ate, crossed the dam, and then started the steep and steady climb up to Shuckstack Mountain. We met a lot of Southbound Thru-hikers all five days of this hike.

It was getting dark and shortly after passing the Lost Cove trail, we went to headlamps. When we got to campsite 113 a fire was already burning with a couple of guys setting next to it. Campsite 113 used to be a rock shelter which was removed and now there are six leveled areas for tents with a group fire site at the old shelter location. We visited with the three other campers until everyone called it a night. We heard from two Screech owls and one Baird owl.

Day Two:
We got up and found the spring which was not flowing at the pipe, but lower down the draw. After breakfast we said goodbye to our friends and headed out. Today's big topic on the trail was water. Everyone was saying there was a lack of water on the trail, but we had no problems. Everyone had a different story. No water at this shelter, no water at that one, water here, and water there.

We got into the Russell Field shelter where five others were already getting their dinners together. Two more joined us later in the evening. We had lots of topics discussed around the fire.

Day Three:
Today was our tough day. Lot's of ups and downs. We got some great views from Rocky Top and visited with a lot more hikers. We got into the Derrick Knob shelter late with the use of headlamps. Plenty of water here and no other hikers. It was a peaceful night.

Day Four:
Another great day on the trail. Lot's of views as we headed over Silers Bald and walked the ridge over to Double Springs Shelter. We met our two thru hikers dressed for Holloween. One had a fern leaf attached to his pack and he was itching "Fernicher" the other had two tree roots sticking up from his pack "GPS". When asked where you were going he would hand you the root.

We got in to Double Springs early and gathered wood. We had this shelter to ourselves as well.

Day Five:
This was our out day. We hiked up to the Clingman's Dome tower and then down to the parking lot where Dad and Mom were waiting for us.

Pictures:
Posted by THE OUTCASTS at 11:29 AM No comments: