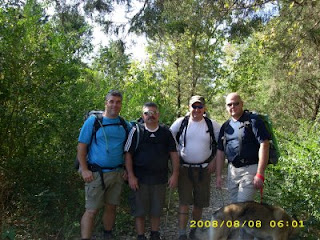 
Once again the vote was taken and everyone voted to start out with the Long Hunter hike. It's a close and easy trail to start with when everyone is out of hiking shape. We met at the trail head and were on the trail by 10am. The whole group was together, which was the first time since the Land Between the Lakes hike last year.

There is always something different when we hike that we can laugh at. This time it was a beware of ticks sign. We have never seen that! Maybe bear, dogs, fires and stuff like that, but never ticks.

It was a beautiful day and we passed a few other folks out hiking the day loop trail. I tried to hide the sign where the trail splits at the beginning, but Greg didn't fall for it. We were planning on taking the long route anyway as I was just messing with him. The long loop goes along the shore line. We ate lunch at the map sign where the overnight loop splits off the day loop. After this time we didn't see any other hikers.

We spent most of the hike to camp just getting caught up with all of our lives. Marco I noticed, was studying the trail and off to both sides. When I asked about it, he informed me that snakes were out and that he was watching for them. I couldn't argue with him over this point so I just did the usual and watched the scenery. It was a beautiful day and the boaters were out in force. When we got to camp it was about 1:45 and there were six or seven boats out in the cove.

We set up camp and then I pulled out the old swim suit. Greg was quite surprised when he found out I was going swimming. I don't know why. Anytime there is water around, I am in it. Sometimes on purpose. I hit the water and soon afterwards so did Greg and Marco. It was refreshing and afterwards made it cool to sit at camp and get dinner going. A campfire was made, but you couldn't get near it. Too hot for that. We had some cocktails and told some lies until it was time for bed. We got a good nights sleep even though we all had to get in the bags sometime around 2am for warmth.

We got on the trail at 9am the next morning and stopped to get a picture of a rock wall that is near the camp. I don't know how long it was, but I know that it took a long time to build. This was the last time we saw Troy. He kept hiking and never stopped. He did leave us a note on the truck.

I got some pictures of the lake and the cactus that is everywhere on this hike. Marco was still studying for snakes as he stepped over a four foot rat snake. Greg was right behind him and had to call his attention to the snake. We did get a picture of this one and might have gotten some laughs.

We stopped for lunch at the same spot as on the way in and decided to take the long way out as none of us had to be home anytime soon.

I guess that once you get to know me very well you will find that I am a little terrified of spiders. It runs in my family, well at least with my brother and sisters. This might be a little frightening for some folks so beware:

I was following Greg and Marco was behind me. Greg stopped and was pulling some spider webs off him. As I was watching him, I glanced over his shoulder and there sitting on his pack was a spider that weighed in at at least five pounds. Because of the for mentioned, I did not pull out a camera so you will have to go with my version of the events.

Greg said he heard a gasp and then saw a hiking pole swinging at his head. By the look in my eyes he said that he knew it was bad and trusted me fully. I hit his pack and the spider went over the back of the pack. I yelled for him to turn around and he immediately did so. Once I saw the back of his pack I began to swing like a kid at a Pinata. Greg said that gave up hope when he heard me yell out in a school girl voice "Marco do something."

It was luck or just that plain fact that when you hit an area about a hundred times you would finally knock this spider off the pack. It just so happened that after I yelled I made the strategic blow. Don't worry, being the tuff type of man that I am, I was ok after about an hour.

The rest of the hike went pretty uneventful and we did have a great time.

Pictures
Posted by THE OUTCASTS at 3:05 PM

LOL. You and spiders.

school girl voice and a 5 pound spider. wish I had a photo of that one!

You big sissy!! A 5lb spider isn't big enough to even take a bite out of your big sissy butt. LOL