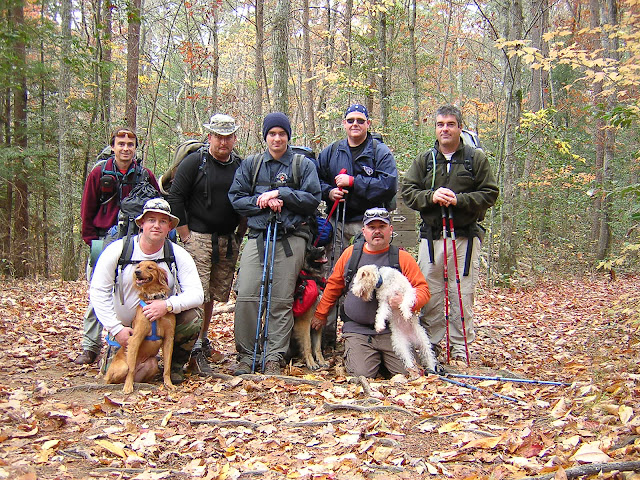 This hike we had a total of seven hikers, the most we have had so far. We had the usual four plus Taylor and Jason, who have hiked with us before, and one new hiker Craig. Jason brought his dog Daisy, Troy had Shadow, and Craig brought Rusty. It made for quite the crowd going down the trail. We did manage to get everyone, without much hassle, to the trailhead.

After we got everyone and all the cars written down on the permit, I heard the humming of angels and a bright glow arrived at the ranger station. YES, it was Troy with a Kroger sack full of his famous fried chicken. Tears came to my eyes and with over whelming joy, I ran over and gave my favorite hiker a big hug. This time Troy included biscuits and instant potatoes for each hiker. What a hero! The wondrous glory was passed out to each hiker and we headed down the trail.

As we arrived at the first waterfall, Savage Falls, just after you get on the South Rim trail, we noticed it was more of a water dribble. This got us thinking about the water supply at camp. There was a family there at the falls climbing all over. We continued on and checked out all of the overlooks on the way. It was overcast today so the colors where not jumping out as much as they could, but they were beautiful.

At eleven they asked me about lunch and I said I could hold off a little while since nobody else was hungry. A little while later, Troy stopped and turned to ask if I was hungry. My pack was already ripped opened and I looked like a vulture on a bad week going after my chicken. He said OK and they stopped to eat with me. We had an older couple with a dog hiking out pass us during lunch. I let them know that the dogs don’t bite, but I do if you get near my chicken.

We stopped for a break at the Stage Coach campsite. We were standing around talking when all of the sudden we heard a payphone ringing. We all looked at each other and were trying to figure this one out when Taylor finally relented and walked over to his pack and turned his phone off. We notified him that this was against policy and he came up with the weak excuse of having a pregnant wife at home.

Just after the Stage Coach campsite, I showed these younger guys how to watch the trail. With it being fall and all the leaves on the trail covering rocks and roots I was worried about them. With a quick twist of the ankle, I hit all fours. You really want to look at the trail closely to make sure you don’t miss anything. It wasn’t clumsy it was for a purpose.

Marco renamed the Stagecoach Trail as the Roll the Ankle Trail. This trail dropped down 700 feet into the Gulf. It is roadbed, but it is also covered with rolling rocks. It was a little rough on the knees and ankles. Greg tried to keep up with me here, but only managed a three-point landing on this trail.

We took a break on at the bottom of the Stagecoach trail and let the dogs run. Talk about a laugh, as they did circle after circle around us chasing each other. The two bigger dogs where running as fast as they could, and little old Daisy running after them being the only one barking provided quite the entertainment for us.

We took the Connector trail another 90-foot drop to the Sawmill campsite. Since we were the only people in the campground, we picked our site and set up camp. Jason, Taylor, and I headed out to fetch a pail of water. The sign said .3 miles to the Schwoon Spring. We followed the trail along the dry riverbed, checking every once in a while for signs of moisture between the rocks. Soon the trail crossed the riverbed and headed uphill. We did a little studying on this one and swept down the riverbed a ways to make sure that there was no water to be found. After not finding anything we started the steep climb up the wall of the Gulf. About 200-feet up the side of the Gulf was a cave that dropped down about 100 feet. Up above this cave was another opening and it dropped about 70 feet to water. With another climb up to the next level we found a place where you could climb down between the rocks about four feet and lean over the edge of a fifty foot crevasse to catch water in our containers. Luckily, I had my camera to prove this story as the guys at camp thought we were just trying to get out of gathering firewood.

We spent the evening around the fire telling lies and sipping on medication. It dropped down to 25 degrees so we got to test some of our bedding out. Greg did entertain us with the lighting of the stove with the campfire. There was a big flash as he disappeared behind the wall of flames and then he reappeared. Luckily he still had the mustache and eyebrows.

The next morning as we were warming by the morning fire, the discussion came up about the advantages of the Bivy verses anything else. Jason was making the point that he can lay in bed and start his coffee first thing in the morning. Greg perked right up and asked why he didn't just scoot his ass over and start the fire this morning.

Troy and Craig got an early start in the morning to climb the hill. The rest of us left out about 9am. The trip out was pretty uneventful. We had one lady hiker that was hiking in when we were taking a break. She asked if we were hunting or hiking. We just looked at each other. She wasn't too sure about this motley crew that she would have to go through. As she passed us we noticed that she had a stuffed turtle attached to the back of her pack. She said that it was because she was a slow hiker. Troy thought that it was an insult as we are constantly trying to lighten our packs and the professionals are bring stuffed animals with them.

Daisy didn’t like the swinging bridges at all. She provided some entertainment at the parking area when Jason hit her shock collar and she jumped hitting her head on the rear bumper of Troy’s car. She learned to listen though.

This was a good hike and for anyone that is heading down into the Gulf, I feel that the Stagecoach Historic trail is the easiest way down and up.

Pictures
Posted by THE OUTCASTS at 12:30 PM

I gotta new stuff animal for Craig's backpack and her name is Charlotte. She's a 5lb brunette knockout with six long beautiful legs. When Craig sees her he screams like a baby.

Glad to see you're back to "inspecting" the trail closely, Craig! After your faultless performance on the AT, I was concerned you had forgotten how to take a good dive. Where were the photographers? They have to learn to be fast on the draw.

Craig, you remind me of an actor in the picture with the hat on. Hummm!! I can't seem to think who you resemble. OH Yeah!! I figured it out. You look like Goober from Mayberry. You never cease to amaze. One day you resemble George Clooney and then the next you look just like Goober! Ya big Goober!! I love ya man!!