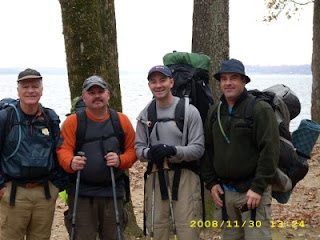 We originally had seven people planning on hiking. When we got to the trailhead we had four. The weather was questionable with rain snow mix in the forecast. Hiking today were Dad, Marco, Raleigh, and myself. Raleigh is a firefighter who has some hiking experience. He had talked about hiking with us for the last two years and we never took him serious. This time he showed up to work with a backpack. We knew he was in this time. We did a quick shake down of his pack in the bedroom at work as I worked at lowering his pack weight. By the time I was done he was crying and sniveling looking over what was left. I left him alone and a short time later he was hiking around the station with his backpack on talking about how good it felt.

We watched as the weathermen talked of the snow to come, telling the children they may not have school, and the radar showing rain. First thing in the morning, I found Marco on his computer studying the weather radar. It looked like we would have to drive through rain on the way there, but it was clear on the other side until the snow got there. A vote was taken and we headed out.

I was use to heading in through Cadiz and taking 79 into the Land Between the Lakes. As we got to the North end we saw a sign showing 8 miles to I-24. I never even thought about just coming in the north end. I got a little ribbing about that. We went to the trail access parking on 101 to catch the Canal Loop trail.

Marco impressed us with his lightweight packing technique right off the bat. He threw his pack in the back of his truck to get organized. When he picked it up there was a puddle of water in the back of the truck with a stream heading off the back. He had put his pack on the mouthpiece of his bladder and drained half of his water out on the ground. He is always thinking about lightening the load.

We got on the trail by 10:30 which was earlier than I had expected. Our goal was Brown Spring which we made by 3. It was nice hiking weather with a cold wind off the lake. Marco was worried about the hunters, which we didn’t see any while on the trail. We stopped for lunch when we found a place out of the wind. The trail has some beautiful lake views. At Twin lakes boat launch we took our group picture. There was also a grave for someone’s cat and Marco found a clam shell. There was also a nice looking sailboat that was blown up on the shore. I’m sure someone was sick. At Moss creek day-use area we found a fish by the path which looked like a bird had dropped. Marco took a pose with it for the camera.

When we got to Brown Spring we found a camper trailer by the spring trail. We decided to fill our water bags and head further down the trail to make camp. We found a spot with some downed trees to use as firewood and a bench. It started to drizzle on us as we set up camp.

After I set up my hammock, I turned and saw some hunter orange coming towards us. This was one of the hunters that were staying in the camper. He said that he had seen the tarps and wanted to see what we were doing. He couldn’t believe that we were going to stay out here all night. He wandered off shaking his head and mumbling.

By the time we got fire wood collected and water filtered, the drizzle stopped. Marco used his Backpacker magazine training to get a wet wood fire going. The only problem was that he didn’t get the memo and put the fire too far away from the tree we were going to use as a bench.

It was still early and our next excitement was time for dinner. During our story time at the campfire we had to put on our ponchos about three times because of the sleet, but never for very long. After the coyotes started howling, Raleigh felt more comfortable. I did notice a couple of items that I had taken out of his pack showed up. When I asked about it he said that he was taking baby steps.

Dad was first up in the morning. I thought that I was going to have to make the fire, when I heard the breaking of sticks. Yes, Dad was making the fire already. We had a good breakfast then had a snow flurry while we broke down camp. We got on the trail by 8:30 and headed to 110. From there we took the hike/bike paved trail back to the North welcome center. When we got there we used the bathrooms and replenished our water supply. From there we crossed the Trace and hit the East side of the Canal Loop trail.

Right before we got to Nickell Branch boat ramp, we heard a scream behind us. We turned to find a woman on a mountain bike heading at us at full speed. This got our attention and brought on some good laughs.

We stopped at boat ramp and had lunch at the picnic area. This is where we got to enjoy seeing a Bald Eagle checking out some ducks in the water. We had a good lunch and tried to lighten our loads some more. It was cold especially on the hands while we ate but there was an outhouse here. Marco wanted credit for hiking more than the trail as we did the walk to the picnic table.

After lunch we continued our hike. There are some large fields to view and then we came to the north bridge. We didn’t see any deer, but we saw a mole, squirrels, bison, cranes, ducks, a bald eagle and a dead fish.

Pictures
Posted by THE OUTCASTS at 11:17 AM

Glad I'm not the only one sniveling and crying over lightening my pack weight! Great report & pics!