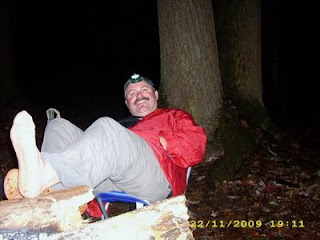 Well Marco, Troy and I headed out to Prentice Cooper WMA for an overnighter. As usual the weather didn't kick in until we reached Mount Eagle. It started with a light rain and gradually got stronger and stronger. Pretty soon I see Troy catching up with me and then pulled up beside me signaling me to pull over. I pulled over at the next exit and stopped at a store. Troy had made up his mind that he was done with this trip. He didn't feel like being wet and saw that the rain was not going to stop for two days. We visited a few minutes and then Marco and I continued on with the "call it at the trailhead system" that we are used to.

We pulled in at the Main Trailhead Parking in a light drizzle. Marco immediately jumped out and said "Let's go!" I said "OK." We signed in at 9:15.

With ponchos on we headed out going counterclockwise around the double loop heading to McNabb Gulf campsite. The rain stayed light with occasional stops until around one o'clock. The trail goes up and down most of the way with rocky trails leading to the multiple creek crossings. There were no views from either Mullen's Cove or Ransom Hollow overlooks because of a fog. We stopped and made a poncho cave to sit in for lunch.

We used the maps off the Cumberland Trail website which we were guessing at around 8 miles. According to the trail signs it came to 8.2 miles to camp. We got to camp at 3pm. The rain had stopped so we started collecting firewood for the night. It didn't take long and we had camp made and a nice fire going. Marco made quick use of his hiking chair, getting comfortable as I used the back rests that someone had taken the time to make at the campsite.

As we fired up the stoves, Marco enlightened me with a new technique. He heated up his water then poured it all over him and the ground. After some words I can't repeat, he started heating up more water. I still don't know what I learned from this, but it has to be good. We ate dinner, took some cough medicine, and told some lies. Marco did entertain me with a fire side dance. I was amazed that at the end of the day that he still had so much energy. I mean he danced. When he finally stopped, he took off his crock and told me that he had an ember go in the hole at the top of his crock.

At around 9pm our relaxing took a break as I had seen a couple of headlamps coming down the trail. It turned out to be a couple of hikers that were looking for camp. They had gotten off work the night before around 10pm and got dropped off at 27. They hiked to Popular Springs Campsite that night and picked up a TTA hiker off the trial on the way in. They had gotten into that camp around 3am and slept in the next morning. They were getting picked up at the Main Trailhead Parking the next morning. We visited a little as they set up camp just down the trail. We never heard from them again. We got a good nights sleep in.

I woke up with the sound of Marco getting the fire started. I got up and eased on over to the fire and got my stove going. I sat down in my makeshift chair watching the fire when I saw a little head peek out from the rocks in the fire ring. Just as I recognized it as a mouse he took off heading between my legs. I jumped up, to Marco's excitement and entertainment, as the mouse went over my seat and out the back. Now, that will get you going first thing in the morning! We ate breakfast and hit the trail at 7:45am.

We got alot of good views today at the many overlooks. We ate lunch at the Natural Bridge, which you really have to climb all over to appreciate it and then headed to Snooper's Rock Overlook. This by far has the best view of all. We then head on to the Indian Rockhouse and Stone Door, before going back to the truck. The trail was pretty much the same ups and downs throughout and in and out of the coves to cross the many creeks. It was a beautiful trail and we would suggest it as a good overnighter. It gives you a pretty good workout too.

When we got to the truck we found a note from the TTA wishing us a great hike with some happy trail dancing. Yes, we did some traditional trail dances on the way. We also met a couple of other hikers that were out for a day hike.

Pictures:
Posted by THE OUTCASTS at 12:03 PM