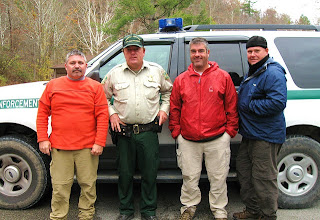 
For our first five day hike of this season we decided to keep up a couple of traditions including the no sleep the shift before and snow on the hike.

After sleeping an hour and a half in a row the night before, we started our five hour drive to the Natural Bridge State Resort Park in Kentucky. Troy drove while Marco navigated. In between snoring, I tried to interpret for Marco so Troy could understand where he was driving to. Greg and Shadow could not make this trip.

As we pulled off the road to get some lunch, Troy saw a man on the side of the road holding one of those signs "Will work for food". Troy stopped and told him to hop in. Well it turned out that it was an advertising sign not a work for food sign.

Right about the time we were going to stop for lunch, I noticed the time change. That is also the time that I realized that we would be missing our ride to the trailhead by an hour. Oops. Luke Moffett was going to meet us at Natural Bridge and take us to Turkey Foot campground. He runs a taxi service out of the Natural Bridge State Park area if anyone needs a ride to trailheads. A super good guy! A phone call was made and we met shortly after the scheduled time.

There was a lot of smoke in the Natural Bridge area as they were fighting a wildland fire for the last month just North in the Red River Gorge area. They had a ban on burning and gave us two numbers to call for more information. Of course no one would answer either phone number.

When Luke dropped us off at the trailhead, I noticed that his trunk was a little wet. The mouth piece on my bladder had gotten squeezed and I lost two liters of water into his trunk and his down sleeping bag that he keeps in the trunk. My bad!

So after Luke left, we picked up our stuff and headed out. I filled the bladder at the first water source which was at mm 154.84 at the cave. We made it about a half mile short of Alcorn Branch when we ran out of day light. We found us a spot and called it camp.

I don't think anyone had trouble sleeping the first night on the trail. We got to listen to owls while we ate dinner and see the stars shine.

The next morning we got up at daylight and hit the trail. Alcorn Branch was dry! I looked down stream and saw a drop off. After some investigating, there is a spring over the drop off with about three foot of water in it. We stopped and filled up.

As we hiked this section we noticed that there was smoke all through the river gorge below. We thought that this was a long way off for smoke to be traveling from the Red River Gorge area.

At mm160.68 There is an overhang with a spring in it if ya need some water too. Shortly after that there is some big rocks in the trail that Marco loss his footing on and did an old fashion face plant. I held his pack still until he got his footing back so he wouldn't do that face scrape maneuver.

We walked through the big town of Arvel. There is zero stores here if you need anything. At Hale Ridge Road we chose to hike the road over the 1.6 mile of trail that is overgrown. When the trail came back to the road I wanted to get on the trail and Troy wanted to hike the road until it met up again. We decided that Marco would have to make the deciding vote. Marco asked for a secret ballet. After a much needed laugh Troy headed down the trail.

Other than needing some trees cut in this section, the trail was well marked and clear. We stopped at a spring in the otherwise dry creek bed for lunch. We were going to air out the tarps and sleeping bags. As soon as we got the tarps set up it started to rain. OK plan B sit under tarps and eat lunch. It sprinkled on us the rest of the day.

We made it to Heidelberg that night and camped on the South side of the bridge out by some corn fields. We ate under tarps and went to bed. It poured that night beating the tarps.

By morning the rain had stopped and we headed into town across the bridge. Heidelberg has a post office about the size of my living room. It looks more like a small shed. There is no store in town and obviously no one has a cell phone as there is no service. We started out big climb up the mountain on hwy 399. Hwy 399 is a dangerous road to hike. There is limited view and no shoulders to walk on. At the top there is a grave yard where you get a phone signal. We called and checked in.

Conveniently Country Mart and Deli is a good place for resupply, or in our case lunch. The lady working there let us use her trees to hang our stuff out to dry and offered the water spigot out back to fill up.

After lunch we hiked on to Mays Food Mart where they have a resturant as well as a store. This would be a great place for lunch or dinner if you got there at the right time. She also offered a spigot between the house and store if you need water.

The next part of the trial is not marked so you really need the trail discription to find your way. You walk down a paved road to a gravel road which desends down into the gorge. From there you walk a four wheeler path to a trail to a creek bed. The campsite at mm 182.82 is the only campsite until the oil storage at 183.98.

We stopped after crossing the Bald Rock Fork at the overhang as it started to rain again. We heard a large bang which sounded like a blasting but too long. After a couple of more we figured out that it was lightning and it was echoing off the bluffs around us. We stayed a little longer as the rain poured down.

After the storm, we hiked to where the trail goes down the creek bed. I don't know what you would do if the creek was running. There are bluff walls on either side of the creek.

We got to the Oil storage area and found a place out in the woods to make camp. It was wet and after we ate and got in the bunks, the rain let loose again. Between last night and tonight, we did us some sleeping.

We got up and hit the trail. We stopped at the creek by the bridge at mm 184.47 and filled up with water. We hiked to Big Bend Road and found us spot to air out our goods again. We had one fellow stop and ask if we were fighting the fire. No, we are just hikers from Tennessee.

After getting things dry we hiked on to mm 188.52 where we came across two forestry trucks sitting in the middle of the road with a load of fire trucks and vehicles on the other side of them.

When we walked up to them I told them that I wasn't expecting to see them yet as the fire was North of Natural Bridge. They informed us that we had hit the end of our hike as a new fire was burning here involving 1700 acres. Soooo after they tackled Troy who tryed to run past them yelling "you can't stop me"! They gave us a ride back to our car. We were about five miles from hiking to the car.

Pictures:
Posted by THE OUTCASTS at 8:31 AM