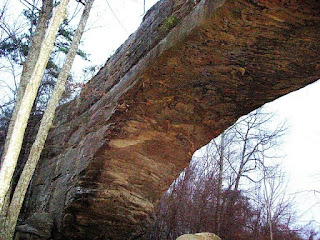 After work Troy, Marco, and I headed to Kentucky for another section of the Sheltowee Trace. We headed to Natural Bridge State Park where we were supposed to meet up with Luke to drop us off where we got picked up by the rangers last hike.

We put Marco in charge of the Thru Hikers Manual of the Sheltowee Trace. The only draw back was every time you asked him where we were, he would start from Natural Bridge and go all the way through the manual. This added alot of entertainment, especially by the end of the trail.

We passed a guy cutting wood on the way. He asked us where we were hiking from and we told him Tennessee. He said that he had wanted to hike the whole trail and was called back to work after he had all of his plans made. He was a little surprised that we hiked this far with no packs.

The Sheltowee passes over White's Branch Arch and next to the Natural Bridge. We then hiked to Balance Rock and down the many many stairs back to the parking lot. It was getting dark now so we packed up and headed to Red River Gorge with headlamps. Once we got past the Whittleton Campground we made camp.

As I was testing my hammock I heard a loud zipping noise. This was indeed my bad day as my hammock ripped completely through about a quarter of the way down the length. As any Outcast would do, I cut the remaining part off and tied a knot, rehung and tested again. Not much room anymore as the length was now the exact length of my body. No stretching out for me over the next four nights and it had a really bad lean to the left which I still can't understand why.

We ate dinner and then got ready to start a fire when the rain set in. We knew it was supposed to rain that night and were hoping it would be done by morning. I let them know that we would hike as long as it wasn't a down pour in the morning.

The next morning we hiked out in the rain. Troy and I had different ideas of "down pour", but as all Outcast do, he went along. It rained all day and into the night. Sorry about no pictures that second day. It was through the beautiful Red River Gorge. This area is rough terrain with beautiful overlooks, rock formations, waterfalls, and of course water crossings. There were six that were at least two feet deep. We ended up the day with a minor misreading of the guide book causing another headlamp hike to the next creek and place to make camp. The rain went into the night replaced by snow in the morning.

Day three started out cold with the tarp ropes frozen to the trees. We hiked in the snow with flurries on and off all day. We tried to air out in the afternoon, but everything was just frozen.

Knowing that we were not going to have water in camp, we started filtering about a mile from where we were going to make camp. There was a house right there so I walked up and asked if we could get some water from them. They were more than willing and wanted to hear our story. I did notice as I walked into there driveway that I had my picture taken by a deer camera at the entrance.

There was a lot of road walking today making sore ankles and feet. We crossed over KY 1274, climbed the steep hill and made camp. We actually got to have a campfire and see the stars. That meant dry feet, shoes, and socks. This was the first night we stayed up past 7pm. We even had a fire in the morning which was nice with it being as cold as it was. We were even in camp before dark....or right at it.

Day five was probably the toughest day of terrain. Lots of steep ups and downs with some beautiful sights including a natural bridge. We got some of our highest points today looking over the other mountains. We got to air out today and dry completely out. We made it to Clear Creek where we filtered water as it began to snow. Darkness was coming on and we had to use the headlamps to cross FR 129 and get into the woods to make camp. The snow was coming down heavy and you could still see the stars bright and beautiful. We agreed to finish that we would have to get up and on the trail early in the morning. We set alarms.

The next morning, no fire, pack, eat, and walk. We had a very long steep climb up to the road that we were not supposed to cross. OOPS! Look for correct trail, study map, look for correct trail, study map, study map, study map........Ohhhhhh! Road walk to find trail. This was the only place that we saw deer. We kicked up one doe in five days of hiking. We all found the trail at the same time different ways. I found the sign for the boarder of the wildlife management area, Troy found the county line sign, and Marco found the Turtle sign. Back on the trail again.

After getting back on track I called Luke and talked to our backup man Doug from Cave Run Marina for our pick up this afternoon. After I got them lined up, the memory kicked in. They are on Eastern time! Guess what guys.......we are an hour behind already. LET'S GO!

This part of the trail was all ridge walking. The Guys said it was more like a forced march. We stopped for lunch at a spot where we had a good view of Cave Run Lake far far below. We then started the descent down to Cave Run. At the end of the lake where we took a break, we saw our first person since we started the hike. It was a bike rider who stopped and Marco and I both thought we recognized him from the Sheltowee Trace Facebook. He knew of Steve from the Facebook. From here you start the long hike around the end of the lake.

We hiked out to the Cave Run Lake Dam forty minutes early and waited for Luke to pick us up. Doug stopped by too, just to make sure that we had a ride. Great guy. We are going to use him on the next section of hike. The FINAL hike of the Sheltowee.

Pictures:
Posted by THE OUTCASTS at 2:01 PM