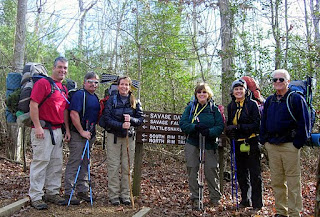 The Outcasts hiked with the Tennessee Trail Association to Hobb's Cabin at the Savage Gulf.

Craig, Paula, and Marco are members of the Murfreesboro TTA, Lora is with the Soddy Daisy chapter. Dad also joined us as well as Pam. This was Pams first backpack.

We got on the trail around 9:30. We took the day loop trail to see the Savage Falls and then head down the Rim trail to Hobb's Cabin. It was a beautiful day and we got some great views in. We met up with the Upper Cumberland Chapter lead by Margaret that were doing a day hike in the area.

After we got to Hobb's Cabin, George joined us for the night. He had hiked in the Connector trail.

The first real entertainment was setting up Pam's tent. Of course this was the first time she set it up. We got some laughs as the four of us tried to figure it out.

We were then entertained by Pam as she carefully picked out a rock, wrapped it up in tin foil and then placed it over the fire. We were all thinking that there are other lightweight meals with more flavor. She was thinking that she was going to warm up her sleeping bag with this. We explained the melting of fabric and she changed her mind. She made a good comeback with making smores for everyone.

There were stories told from pies to chickens and some cough medicine taken. Ranger light foot stopped by to visit as well. Lot's of laughs all night. We apologized to other campers in the morning for our wild behavior.

The next morning we hiked out on the Plateau trail. We took a good rest break at lunch and Paula waited until the last bit of the trail before she showed Pam the correct procedure to use while falling with a backpack on. Always the teacher.

More Pictures:
Posted by THE OUTCASTS at 10:23 AM