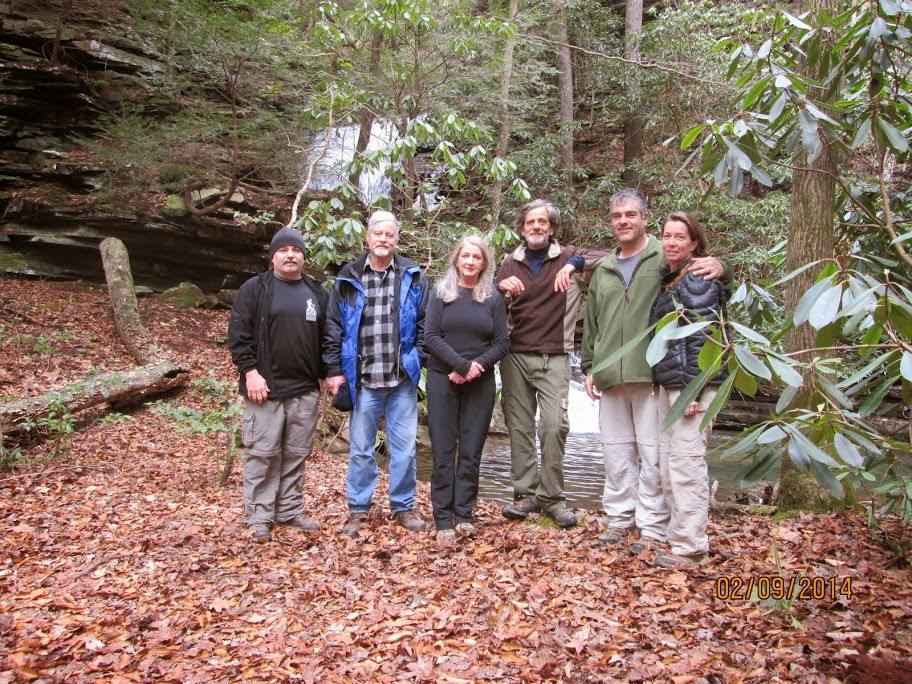 Murfreesboro TTA members Sara, Marco, Wayne, and I with Lora and Chuck from Soddy Daisy TTA, did an overnighter on the North Chickamauga Segment of the Cumberland Trail.  The young lady that picked this section from Memphis could not make it because she got "bit by a owl"?  Had "knee problems" or whatever reason, anyway we missed her company.

We met at the Montlake road trailhead and headed in taking the Hog skin lower loop after we got Chucks keys out of his car.  By the time we made it to the overlook past the stairs, we were ready for lunch.  The next section was old road bed that was covered with blow downs.  The real challenge starts at the cable crossing.

At the cable crossing, a tree was down in the middle of the creek on the cable.  Chuck went across first and whipped out a saw that would make a young girl blush.  He quickly cut limbs to make a safer crossing.  The cable is actually broke on the far side, being held in place by where the tree had grown around the cable.  It was a wet crossing for some and and an old fashion foot washing for the rest.

After the crossing there is another cable to help you get down to the ladder.  The cable came up and hit Marco's pack just right to completely empty one of his packs' pockets.  The stove and other contents went rolling down the hill.  The stand for his stove fell off the edge and was rescued by Chuck.

From the ladder down to Chickamauga creek was steep and slippery.  Everyone was excited to see the campsite and then quickly disappointed when I notified them that this was not the campsite we were staying at.  I think there was a competition between Sara and Wayne to see who could see the most worms as they both spent lots of time on the ground looking?

After we got to Stevenson's Branch campsite, we set up camp and collected firewood.  We spent a little time inspecting each others camping gear and then we sat around the campfire eating dinner.  The night was spent telling lies and taking cough medicine.

The next morning Wayne volunteered to watch camp while the rest of us did a day hike to the far end of the trail.  After a good old fashion foot washing in Stevenson's branch we did the switch backs up the side of the gorge.  We were very impressed with the trail work and design on this part of the trail.  Probably the best switch backs on the Cumberland trail.  We took a break at the overlook and then went to the parking area.

We got to see Panther Branch falls which had good water at it.  On the way back we stopped at the overlook again and ate our lunch.  We got back to camp where Wayne was glad we made it back.  We packed up and headed out.  Chuck went ahead and cleaned up a lot of the wind falls we had to climb over on the way in.  Sara and Wayne continued their competition as we went.  Marco got the award for the best fall as he was doing the cable crossing.  He got extra points for water coverage.  We saw a few hikers and trail runners on the way out.

Our wildlife consisted of a Bald Eagle and a mouse that ate Wayne's walking stick strap.

Great hike with some great people!

Pictures:
Posted by THE OUTCASTS at 12:19 PM