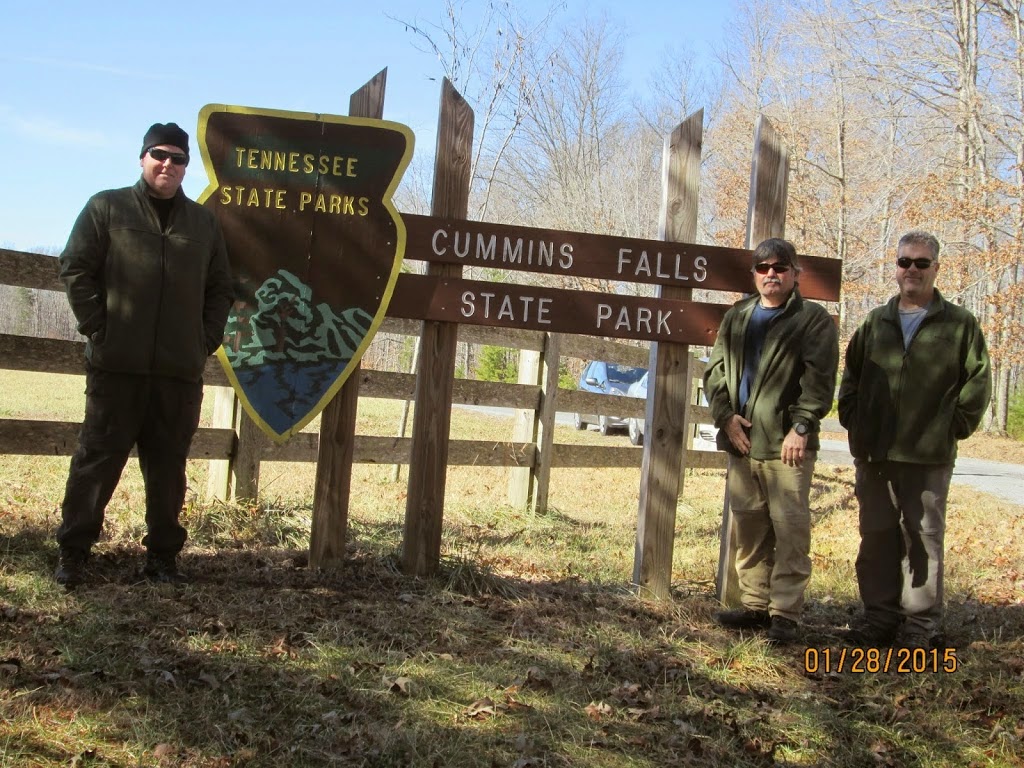 We tried to knock out a couple of parks on this hike.  We started at Cummings Falls State Park. They have done a lot of work for a new park.  They have an extremely large gravel parking area and a nice looking bathroom built.  The trails are clear and trash free.

At the parking lot we met a guy and he was asking if we had any information on this park.  After telling him that we did not he headed out.  We hiked the Overlook trail, Shortcut, and Downstream Trail to the creek.  The map shows that it stops there, but I guess you can walk all the way to the falls?  We walked down the rocks along the side of the creek to another small fall on the other side of the creek. After that we turned around.  We met the guy again and this time he told us that he had hiked this area before when they first opened it. OK? We went back up and to the falls on the top. Beautiful falls!  We walked to the top of the falls and explored the area before taking the Upstream trail back to the parking area.

After this hike we headed to Standing Stone State Park.  We checked in for the campground and then hiked the Lake Trail around Kelly lake. It is a well used trail and in good condition. There is one area that they have some wires down on the trail.  Being firefighters, we treated them as hot and moved around them. We passed another hiker that said the wires have been there for a couple of weeks and that they were working on them.

They obviously have beavers who like to cut down trees.  We saw lots of places where they have worked and a large dam they built on the South side of the lake on Morgan Creek.

There is maintenance being done on the main dam at this time.  They have scaffolding up along it.

There is an 8 mile loop "Cooper Trail" off of the Lake trail that is on State Forest land.  The lady at the office said that it is not marked well or maintained and that people have gotten lost on this trail. She recommended that we did not hike that trail. The closest trail head is at the Overton Lodge for this loop.

We stayed the night in the campground. We were the only ones there for some reason? In the morning we woke up to some light sprinkling rain.  Troy said a storm was moving in, there was a national weather service warning and the schools were running late / closing due to weather. We did a quick pack up and headed home.

Pictures:
Posted by THE OUTCASTS at 6:14 AM