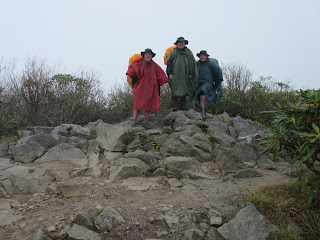 Marco missed this section of the AT so we started out our season getting him caught up. From here it will be back to Hot Springs NC. We decided to change it up and hike it backwards so it would be all down hill this time.  HA HA HA.

We dropped off the truck at Fontana dam and drove up to Clingman's dome to start our hike. Our first injury of the trip was Marco's finger. He had his hand out the window with fingers on the roof when an acorn fell and hit it while we were driving.

When we got to Clingman's of course the traffic was backed up for a couple of miles. When we finally got somewhat close to the parking area, we did a U turn and parked on the side of the road. That gave us the chance to warm up before we started hiking. After fielding all the usual questions by the hundreds of people, we finally got on the trail to join the Southbound thru hikers.

We stayed at Double Springs shelter. They had a fire going before we got there which was a blessing for once. We had two thru hikers, two older men (anal and A** hole), Light Red and his three friends for a total of eleven. The lady thru hiker was looking for a place to hang her pack when Troy said that he could move his pack to make room for her friend. She let him know that "I don't have any friends". That of course left her wide open so I had to follow up with "I just got here and she already said that she don't like me! That's my quickest record  with a woman yet!" Lot's of laughter. Later she asked who had the pink water bottle of the four colors of bottles. The one guy said "it's not pink, it's light red". "If you say so", said the the lady. That's how he got his name. We got lots of laughs in that night around the fire.

Started out the day right. Troy had made some dehydrated hash browns to go with my eggs. Another success. Today was lots of up and downs as we headed to Derrick Knob shelter. We had gotten there early enough to gather firewood for the night. A hike came through and asked if we were the Outcasts. He had read our blog. We met Texas and Brother-in-law as they came in to spend the night. Had some more good visiting and time around the fire. Then the rain came in an sent us to bed for the night. It rained hard all night long. I think there were eight in the shelter tonight.

Texas and Brother-in-law said they were staying with us tonight as well at Russell Field shelter. We hiked off into the fog today climbing Thunderhead and Rocky top. We had the same views I had with my Dad and Brother years ago....NOTHING! After we dropped down from the peaks, the clouds cleared and we got to see mountains again.

Again we arrived at the shelter just before Brother-in-law. The Canadian was already there. He had seen a mother and two cubs back a couple of few miles back, eh? I assume a couple means two, a few is three or more, so around six miles and eh is +/-. Any way, we some more good visiting tonight as the temperature dropped. I got to try Troy's dehydrated bandanna pudding, awesome! No fire because of the 90+ miles and hour wind blowing.

Shortly after we got to bed, Norm stopped by for a visit. Marco tapped my shoulder and told me someone was running down the trail toward the shelter. He came in and while sitting he was opening a pack of tuna. Two seconds later he opened a bag of chips, turned it up and emptied it. He asked about water and was off to get it as soon as we told him where. He almost passed himself on the way back. We asked if he was staying and he said no. He had left Newfound Gap this morning and was heading to Fontana tonight. Getting 41 miles today. I asked if felt like he was missing anything hiking at night and he replied he had already hiked the trail once. He had walked Northbound and turned around and headed back while he had the time to do it.

The wind blew most of the night. At some time when I got up for a bathroom break, I scared off some big animal as I heard it running out through the woods.

Today we hiked up and down. Troy got to do to me what I do to Lora often. I got up from lunch and started following Marco. Shortly I noticed that I didn't have anything in my hands. I turned to go back for my hiking sticks when I noticed Troy carrying four poles with a big grin on his face.

We played tag with Texas and Brother-in-law. They got to campsite 119 first and scared off a mother and three cubs from the campsite. Texas and Brother-in-law headed on to the dam. After getting camp set up Troy and I saw them again down at the bottom of the creek bed. We had another group of five guys that came in later in the evening. One of them yelled on the way in "There's the three stooges." We knew they had talked to Brother-in-law on the trail! Another good campfire night! It sure felt great to be back in our hammocks after all those shelters.

We climbed Shuckstack and the tower for some great views, then made the steep steady hike down to the dam.

Great pictures of the smoke in Smokies