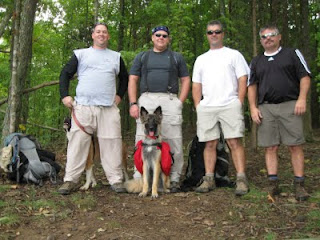 We have numerous folks that say that they want to join us each year. We always tell them, if they have little to no experience, to join us on our first hike of the year to get started. So, after notifying everyone that had mentioned hiking to us, we started off this year with just us. Marco, Troy, Shadow, and me. Craig, who had hiked once with us last year, hike with us this time and is planning on hiking with us on a regular basis. He brought his dog Kuippo.

As per our regular routine, we did a long day and then ran all night at the firehall before setting out to hike. We met at the trailhead and hit the trail at ten o'clock in the morning.

The weather was beautiful and as usual we were ready to get the season started. After the seed tick attack on Marco and I the last hike a week ago, we bathed in DEET before we hit the trail. Then, just as we got our packs on, Troy said "hold on a minute, I forgot something." He went back to his car and pulled out a large cooler which he opened to reveal to us a pile of Troy's famous fried chicken that a show dog couldn't jump over. Well, as usual, being the emotional guy that I am, I started crying at the beauty of it as Troy passed each of us a bag containing a chicken each and some biscuits. He had fried up enough to feed eleven plus us and only about seven ate the night before. Yea, it added three to five pounds per pack, but who really cared?

When we signed in at the ranger station, they told us that a boyscout troop had been out last night. We met them at the split of the day loop and overnight trail. We figured that when we got to camp there wouldn't be any firewood for atleast five miles. From there we really got into the wild flowers. We got into camp at one forty.

We set up camp and collected firewood. We enjoyed the lake and some stories as we waited for dinner time to come. After dinner we got the fire going, and then just before sunset Marco and I hike down to the end of the cove to catch the sunset on film. It was quite the show that mother nature put on for us. You pretty much had to be impressed.

Craig had brought his Sawyer Point One water filter, which we were impressed with. It is a gravity fed filter which really pours out the water. The only draw back that I can come up with is that you have to have a good enough water source to collect in a bag for filtering.

That night, we sat around the fire with our cough medicine and told some lies. We though about keeping up with Marco's words of wisdom. For example: "It gets colder as you walk away from the fire." He might be famous some day.

Some time in the early hours of morning we got some light rain. By morning it had stopped and we had a fire going for breakfast, which also included chicken. We got on the trail at eight thirty this morning and had a beautiful hike out. We got to see squirrels, and those green headed ducks as Marco called them. I had just told Craig that I never see any deer on this side of the park, when we scared off three.

Another fine start of a hiking season. Looking forward to many a snow fall this year.

Pictures:
Posted by THE OUTCASTS at 5:23 PM