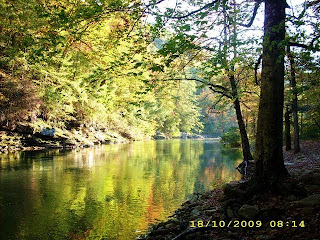 This turned out to be a last minute trip by the Outcasts. I was planning on leading a hike for the TTA at Natchez Trace State Park, but could not get any takers. When no one signed up, I decided to hike a trail that I haven’t done yet and got some hikers to join me.

Marco(TTA), Craig, and I(TTA) were going to do the full trail and Lora, from the Soddy chapter of TTA, was going to join us the second day and do a day hike with us.

After a night of running we headed out. It rained all the way to Dayton. My boys had no confidence in my hiking plan. It cleared up, as we got closer. Our first mishap was looking for Shut In Gap road off Hwy 111. It runs of Hwy 68.

Not sure that we were on the right road we drove it down to Duskin Creek Bridge and then turned around and drove back up to Forest Camp Road. Well the campground doesn’t have a sign either and after some investigation we found the only sign anywhere is at the actual trailhead.

So if you are looking to hike this section of trail, the first left after Stinging Fork Wilderness Area is Walden Mountain Road. Take the first right off that and you will find the unmarked campground on the left. Take the second entrance to the campground and the trailhead will be on your right.

We got on the trail at noon. There is a bridge on this first section that is slippery when wet. I told Marco just in time for him to do some dancing. We were impressed.

The trail is beautiful and has a lot of ups and downs. There is a marked spur trail to the North of White Pine cascades that is not on the map and we are not sure where this one goes.

We took the spur trail to Spider Den. This goes steeply down to the river where there are two more campsites that someone has taken the time to make chairs and tables from rocks. You also see the diving platform, which is a flat rock that sticks out over the bluff wall. Spider Den, which luckily doesn’t have spiders in it, is like a large rock house. The trail is about a half mile long. It will take your wind on the way back up to the main trail.

There is another campsite just before Deep Pool Bridge. We took the short spur trail to see Hemlock Falls, which is a very small fall. We were more impressed with the cascades that we had seen.

When you get to Rockhouse branch, the trail cuts off to the right and down. Before you get there you are hiking the old rail bed and if you are an Outcast, you are libel to hike it all the way to where the branch starts. First off we noticed that the trail wasn’t as worn and then finally it ran out all together. We decided to backtrack to find where we missed the turn off.

Pine Branch Bridge is in a little need of repair, but with all the recent rains all the water was pretty.

There are two campsites just across the suspension bridge at the Piney River Crossing. On the way to McDonald Branch Craig took a knee. This was nothing like what the next day would bring. McDonald Branch is a tricky crossing where you might have to do a little tree hugging to get across.

From McDonald Branch to the Twin Rocks Nature trail you look down at the river. Right after the junction you go down to the camp and picnic area next to the river where we stayed the night. We gathered firewood and set up camp. It was time to eat and cold enough to get the fire going. This was the first time that the sky cleared and you could see a million stars. Some lies were told and some cough medicine taken. We had an owl tell us a couple of times to keep it down.

It had gotten below 30 during the night. I got up and started the fire so the other two would get out of bed. Shortly there after, Lora came walking down the trail to camp. We visited while we ate breakfast and broke down camp. The sun was shining and we new it was to be a beautiful day.

Craig tried to impress Ms. Lora while crossing McDonald Branch. He reached for the tree to hug and then did a backwards somersault over a boulder and landed on his butt against a second one. He did get his arms up in the air for points afterward.

Shortly after crossing McDonald’s Branch Ms. Lora decided to put on her show and landed on her butt after tripping over a rock. She then called out Marco stating that his turn was next. Not to be outdone Marco stepped on a flat rock that slid off the trail and took him with it. He ended up doing a 360 and planting his butt on the ground. I told him to hold still for a picture. He actually ended up with a leg injury that needed some nursing. I did not want to impress Ms. Lora after seeing the competition and gracefully bowed out.

At this time a group of boy scouts hiked pass us that had stayed the night at the Logging campground. They said that they had had a great trip.

We stopped at the suspension bridge for a snack while the sun shined down through the trees above.

We took the Logging camp spur and looped up to the Rockhouse Branch spur which the sign said picnic area. We must have missed the part that went to the campsite. Shortly after that we stopped and ate lunch along the trail.

We hiked the Spider Den spur to show Lora the sights and then continued on. She had also not hiked the trail from Duskin Creek Bridge to Newby Branch campground.

On the way to drop Lora off at her car, we drove by the Stinging Fork Wilderness Area and decided to go ahead and hike that down to the falls and back. This is a strenuous trail, but a beautiful waterfall.

Another beautiful trail to recommend to everyone and a wonderful hike to write about.

Pictures:
Posted by THE OUTCASTS at 4:07 PM

I see Lora couldn't be kept away from a hike after all...LOL!!!

Looks like a great section hopefully I'll be able to get to it soon.

Thanks Outcasts for letting me join you on Sunday. It was a great hike and a beautiful day. Ya'll are so much fun to be on the trail with.