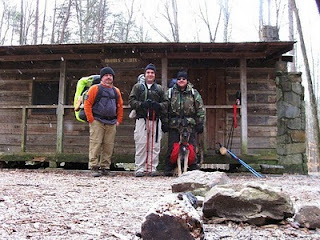 After work we headed out to do some hiking. Originally we were suppose to hike Virgin Falls and Bridgestone/Firestone. The river is over four feet deep right now and flowing fast. So, this brings us to plan B. Where do you want to hike? Marco had never hiked to Hobb's cabin so here we go.

We got on the trail by 10am. We decided on the way in to hike the Rim Trail to Hobb's cabin and hike out on the Plateau trail. On the way in we met a couple of new hikers that were just getting into backpacking. We like to see more people get into backpacking. It's a great sport and there is so many places in Tennessee to see. We can take pictures, but you don't see the true beauty unless you are standing there.

Shadow was so excited on this hike she just kept running back and forth between us. I don't know if it was the cold weather or just her love for hiking. We did have to use gloves and some face protection from the temperature. The views were beautiful as always out here. The guys pushed me on past my lunch time til we made it to the next overlook. When I refused to leave the overlook until I ate, they gave in. Marco had brought some baked chicken for our lunch and dinner.

We past three hikers that had been at Hobb's cabin for the last two nights. They were heading out. They said that there was still some firewood left.

A few miles before we got to the cabin, we had another couple of guy's pass us heading to the same spot. We would meet them at the cabin.

We arrived at Hobb's cabin around 2:30pm. Our camping partners were there and already had smoke coming out the chimney. That's always a good sign. After introductions we started the collecting of wood. This area had been cleared out pretty well.

After we got a good stack of wood and collected some drinking water from the creek, the decision was made to have an outdoor fire as well. We needed to burn some of the longer wood in half so we could use it in the cabin. Also, the fire warmed the cabin up, but we needed something to warm ourselves up a little faster. This provided some entertainment as the wood, leaves, and twigs were all frozen and did not want to burn.

After the fire started, Marco and I set up our hammocks. Troy, Shadow, and the other guys were going to stay in the cabin. Marco and I are the stupid, I mean diehard backpackers. We came to camp!

First things first. Dinner! We got our dinners going and Marco boiled his water twice as he used his first cup to wash down the table top. Always cleaning! After dinner we gathered around the multiple fires and started taking cough medicine. The temperature dropped as we looked at the extremely clear sky filled with an amazing amount of stars. Lies were told and the fire building class was entertaining as ever. I have never seen a fire rearranged and rebuilt as many times as this. Sometimes you just have to stand around a say WOW! We had multiple fire designs with rolling logs and gear burns. Yes, I had plenty of laughs.

After the last killing of the outside fire, I went in to watch Troy working the inside fire. It was bed time and out to the hammock I went. I asked Marco if he was warm enough as I passed his and he said yes. He was snoring by the time I got in my bags.

We woke up to snow. What a beautiful morning. Marco had gotten up and got the fire going in the cabin. The water in the back of the cabin was frozen, but our bladders that we left by the mantle were not. We thawed our water and filter while making breakfast and packed up for another day of hiking. Our new friends never stirred so we left them with a warm fire.

The snow that was falling was so cold that when it landed on your clothes, you could see the individual design of each. It was beautiful. Our trip out was pretty much non eventful. We saw the rangers driving through the woods, but that was it for other people.

Pictures:
Posted by THE OUTCASTS at 6:49 PM

It seems by now that you guys should be over that cough. How many gallons of the cough medicine will it take?