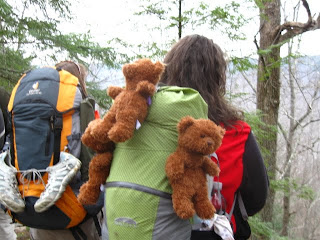 This is the story of curly locks and the three bears. Millette has made many trips to the Smokey Mountains and has yet to see a bear. As another attempt to see a bear in the wild, she took Marco, Lora, and I out to Collins Gulf where there are suppose to be three bears living in the area.

We met after shift and head out. We met Lora at the Savage Gulf visitor center to sign in, then we headed to the Collins Gulf trail head. We got on the trail around 9:30am. We hiked to the split and then we headed East across the swinging bridge and up to the rim trail.

I had practiced my bear call with a couple of whistles and then "Here Bear, Here Bear". I tried it numerous times while we were hiking with no luck. I think that the bears got tired trying to keep up with Millette as she smoked down the trail. She even tried to starve me to death, until I finally caught up to her and begged for a lunch break.

Anyway, it was a beautiful day for hiking and once you get across the bridge and up on the rim it is easy hiking.

We hiked into the Stage Road campground and made up camp. We got a pile of wood collected for the night and then set in to burning it. Some stories were told as cough medicine was taken. We were talking about the bears when I heard something coming up behind me. I turned around to see Ranger Litefoot walking up. He didn't say anything until he saw me looking at him. He had walked up with his light off and not letting us know he was coming. Good thing we don't get excited! As always in the Salvage Gulf, the rangers were extremely friendly and we had a good visit.

We just happened to carry in three stuffed bears for Millette and waited patiently for her to take a potty break from camp so we could plant them in her tent. She got a bit of a surprise when she went to bed.

The next morning we got up and Millette fed her new friends and attached them to her pack for a nice hike. We hiked down Stage Road and took a break at Saw Mill campsite. The trail through the Gulf was very pretty and a nice hiking trail. As you get toward the falls the trail gets more difficult with a lot of uphill. There are bluffs and water crossings before you get to the falls.

The ice formations get better as we reached Horsepound Falls. When we got to Suter Falls we were almost overwhelmed by the sight of the frozen falls and all the ice. It was a bit challenging to get to the trail here let alone make it along the trail covered with ice and having to go around large icicles.

We never did get to look at any real bears, but I think that Millette was happy to see the ones she did.

Pictures:
Posted by THE OUTCASTS at 12:57 PM