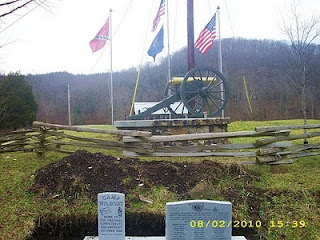 
On this hike Marco, Troy, Shadow and Craig went. We started out the usual way with running fire calls all the night before. As we headed out we watched the weather as Memphis had already gotten four inches of snow that morning. What were the chances that it would go all the way to Kentucky?

We headed to Holly Bay Marina again as Randy was willing to help us do the shuttle to the trailheads. We were starting out at I-75 and heading North to Hwy 421. For some unknown reason, the further we go North the longer it takes to get to the trailhead. This part of the Sheltowee Trace is a lot of road hiking.

We started out with some beautiful weather for hiking. Marco was having problem with his ankle from a previous hike. As the famous words of Greg, "Pain is Fear leaving the body." We hiked to the Camp Wildcat Battle Monument the first day which is about five miles. This is all road hiking. There is a monument at the railroad crossing, then a sign half way up the hill, and another monument on the top to include a pavilion and outhouses. It's a pretty good uphill climb. There is a small spring on the top of the hill. I don't know if it runs all year long or not, but it had water this time.

We ran into two ladies from Ohio at the pavilion. They were heading home from Georgia when they saw the sign and stopped to check it out. We had a good visit with them and then they headed out.

We found us a place off the trail to make camp. We got camp set up and a fire going before sitting down for dinner. After dinner, we started to get a light dusting of snow. We were all tired from the long night before, so it didn't take long for us to call it a night and go to bed.

I got up some time that night to find about an inch of snow on the ground. Later I woke to the sound of rain hitting the tarp. It was a steady rain that lasted all through the morning.

Marco and I got our breakfast going under the tarps and packed up. When I got with Troy, he said that he was soaked, his clothes were soaked, and his tent was soaked. He said that while he was stuffing his tent in the bag, that water was running out the other end. He was wet and with the rain supposed to keep coming all day he was ready to head to the house. We hiked back to the pavilion at Wildcat and made a phone call to Greg to come pick up Troy. Knowing that all was well, Marco and I headed out in the rain.

The next section of trail is all dirt or jeep road. This road had large mud puddles all down it and you wouldn't think that anyone could drive down it unless they had four wheel drive. Well, here comes a little Toyota pickup with a guy and gal in it. They stopped and asked what we were doing walking in this kind of weather. We told them and they said that they were out picking up trash as this was their fathers land. I don't know about that, but we asked them to offer Troy a ride to the restaurant when they drove by him. When we got further up the hill we found a spot with a view. You could tell that they had stopped here with the truck and then turned around. There was some fresh tissue on the ground too. I don't think it was trash they were after.

We hiked this jeep trail in the rain to road 760 which was paved. You definitely want a map to follow all the road sections. There are some interesting trailers in this area and where you turn on road 4078. From there we got on the three miles of actual trail. During these three miles you cross Denny Branch about twelve times. None of these crossings has bridges and some are rather challenging. The last creek crossing is Parker Branch with an old fashion foot washing. Put on the crocks and go about knee deep.

From here you are hiking Road 490 to Lamero, which is a collection of houses. Once you cross the bridge over Rockcastle River you turn right on Road 89. The rain had stopped and we got to view some interesting Kentucky homes. We passed one 10x12 shed that had a smoke stack out of the top. There was smoke coming from it, but it had no electricity or for that matter any windows. As we went by, the traditional dogs started barking and we passed the front which had a single door on the front made of rough cut lumber. There was one space between the boards that was about two inches wide. Well, when I looked back at it again, I saw a person pulling his head back in and closing the door.

We followed this road until you cross the bridge and take a right on another jeep trail 455. This road followed Horse Lick Creek until you came to a river crossing. Well this crossing was way over our heads and about thirty feet wide. We studied the maps and saw where there was suppose to be another crossing up stream with a concrete plank. On we hiked. When we finally got to where this crossing was and I pulled myself out of the knee deep mud, the water was way over our heads and about twenty feet wide. If there was concrete, it was deep. There was no safe way to cross and this was the end of the road I guess you could say. Well the road ended.

It was getting dark and we decided to make camp. We got a fire going and ate dinner. Then the snow kicked in. It came in strong with big flakes. We gave up and headed to the hammocks. Enough was enough. I studied on the maps and the only way I saw to get across was to go back to Road 89 and hike an unnamed road to road 431.

After a good LONG sleep, we woke up to three inches of snow and snow still falling. The wind had beat the tarps against our hammocks most of the night. It takes a while to get the ambition up to get out of bed in these conditions. Both of our boots were froze so solid it took us forever to get our feet in them. Finally we got packed up and started back tracking. We had to hike 5.7 Miles back to Road 89

We got to go by the dogs again and then headed East on Road 89 to an unnamed unmarked road. I was worried about leaving the trail because we hadn't had a phone signal since we left Wildcat. We passed a trailer with the traditional dogs barking and a lady came out to yell at them. We asked her about the road and of course there was no such thing to this lady. On we hiked.

Finally we found a two rut road that fit the description with a no trespassing sign on both sides. It ran along a farm fence so we walked down to the farm house to ask permission. A lady answered the door and said to go ahead. She gave me a description that matched the map, so I felt like this was the right one. I tried one more time for a signal and got one on the phone. I called my people so they knew where we were and what our plan was.

It was a steep climb to the top and about a hundred mile an hour wind when we got there. The logging road across the top was in really good condition. We finally found a dirt bank that was high enough that we could get out of the wind and eat some lunch. After that we walked on to 431 which other than the four inches of snow and high winds, was easy walking.

We walked to the S-Tree campground where Marco called it quits with his sore ankle. He had lost enough "fear". We called Randy to pick us up at the campground. We got under a pavilion and sat at a picnic table in our sleeping bags drinking hot chocolate until Randy showed up. We did have another car stop by which made us feel good that they could make it through the snow. These people were just out joy riding.

Randy and his brother showed up and gave us a ride back to London where our car had been prepositioned for us to get on I-75. At one point I thought that we might have to give Randy a ride as his transmission was acting up. It ended up that he was low on fluid.

Pictures:
Posted by THE OUTCASTS at 2:24 PM