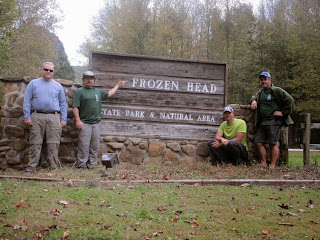 For our second hike of this season, we picked a new park for us.  Frozen Head State Park in Wartburg was our destination.  Travis was brave enough to join us again for this hike.  As usual between getting off of work, travel time, lunch, and getting our permit, we got on the trail around noon.

We started behind the ranger station with the Visitor trail taking it to the Interpretive trail to the Old Mac trail to start on the Spicewood trail.  A ranger came up the Old Mac trail on a bike to ask us if we were the ones that left the gear in the parking lot.  Believe it or not, it was not us!  Someone had about eleven bags of gear that they just left there.  After our visit we passed the only two people for the trip and they were just day hiking.

It was a cool morning, but it got cooler as we climbed.  Where the Spicewood trail meets the Chimney Top trail is the coldest place with a good strong wind blowing.  We stopped at the Tub Springs campsite for a break when Troy realized that he had lost his seat cushion.  So Marco and Travis went up to the lookout tower while Troy and I headed back down the trail to find the cushion.  We found it about a quarter mile past the Spicewood / Chimney Top intersection.

We all met up at the North Old Mac trailhead, swapped stories and then headed down the trail to Panther Branch trail.  We stayed the night at the Panther Branch campsite.  It was getting dark fast so it was a race to collect firewood and set up camp.  There is a large tree down at the campsite, which is the only downed tree we saw in the whole park.  The trails are very clean and in great condition.  They will also get you in great condition as you are either climbing or descending the entire time. The average elevation gain and loss per trail is 1142.5 feet.

The water level in the park is very low at this time.  We still had running water at the campsite, but not a rushing creek.  We had a good cool night in the 30's and were being sung to by the owls all night long.  Not only a lot of owls, but a good variety as well.  We sat around the fire telling lies and drinking cough medicine.

The next morning we got up and ate breakfast.  Travis and I headed out to see the falls.  We knew there wasn't much water, but both of them were flowing.  We got some pictures and then joined back up with Troy and Marco at the camp.  We headed back up to top backtracking the way we came down last night.
We ate lunch at the Tub Springs campsite.  They wanted a picture by the Tub Springs so we went there next.  From there we were going to take the Fire Tower trail back down to the campgrounds.  We were talking and Travis asked if this was the trail and I said yes, because the Fire Tower trail is a roadbed hike.  It wasn't too long and we came to a switch back in the road which went either way.  I did not remember any such thing on this trail, but after investigating we pick a road and stuck with it.  Before long we saw a paved road.  This was not good as there is no paved roads in the park.  Pretty soon we walked down to it.  Time to check the old map out.  Yes, I had taught the men how to pay attention to where you are going as I had planned.  We were on the wrong side of the mountain.  Their punishment was to hike the two miles, 1180 feet in elevation, back up to the top of the mountain for the second time today.

It was getting late and we needed to be out of the park so we took the South Old Mac trail down the other side of the mountain.  We stopped at the park sign for our final picture on the way out and since there was no Waffle House anywhere close we stopped at Hardee's for our off the trail celebration before heading home.

Frozen Head is a great park for hiking.  It is a very clean and well kept park.  Most of the campsites do have a table.  There are some sites without water so make sure you check out which one you will be staying at.

Pictures:
Posted by THE OUTCASTS at 7:13 AM