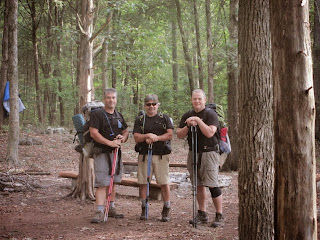 As we start out our eighth year of hiking together we did our annual hike to Long Hunter State Park.  As we signed in at the office we saw our first three deer and a Genie.  It was good to see that our State Government is better than the Federal Government and we are still up and running.

Marco decided to use his fancy phone this year to find out exactly how far we hike here.  We have been going from the park mileage and some guessing in the past.  Basically they advertised the Volunteer trail as a six mile trail and the day loop as a four mile trail.  We estimated it at eight miles in the past one way.

We took the usual route going the lake side of the day loop to the Volunteer trail.  When we got to our break spot which is the bench at the Northern most point of the day loop trail, we met Don Haynes.  Don is an active hiker and we had a good visit with him.  Just as we got started again we found a box turtle with a hole in the top of his shell.  He was moving right along, so it took me a few pictures before I got a good shot.  I figured it was a pocket for his cell phone?

When we got to the kiosk on the Volunteer trail Marco had us at 2.4 miles.  It was looking like we were going to be a bit shorter than we thought.  We ate lunch there and then headed on.  It wasn't long before we came across a mileage sign which they have never had before.  We figured that someone else had the same idea.

We saw many more deer on the way to camp.  When we got to camp we saw the mileage sign stating 5.5 miles so they have cut the trail by .5 miles.  Marco came up with 5.9 miles of course that was with the day loop in it.  The trail was more grown over than it has been in the past and they still have not repaired the two bridges that floated away in the 2010 flood.  There are a few very large trees down too.

Campsite #1 was upgraded with three long Ceder benches on blocks and the fire pit in the middle was mortared stone.  We set up our hammocks and collected fire wood.  Soon afterwards I was swimming in the lake.  It was hot and muggy so I needed to cool off.

We had a calm night listening to the owls and coyotes.  We sat around the fire taking cough medicine and telling lies.

The next morning we hiked out going with just the Volunteer trail at 5.5 miles.  Yes, we had our Waffle House meeting afterwards.

Pictures:
Posted by THE OUTCASTS at 5:35 PM